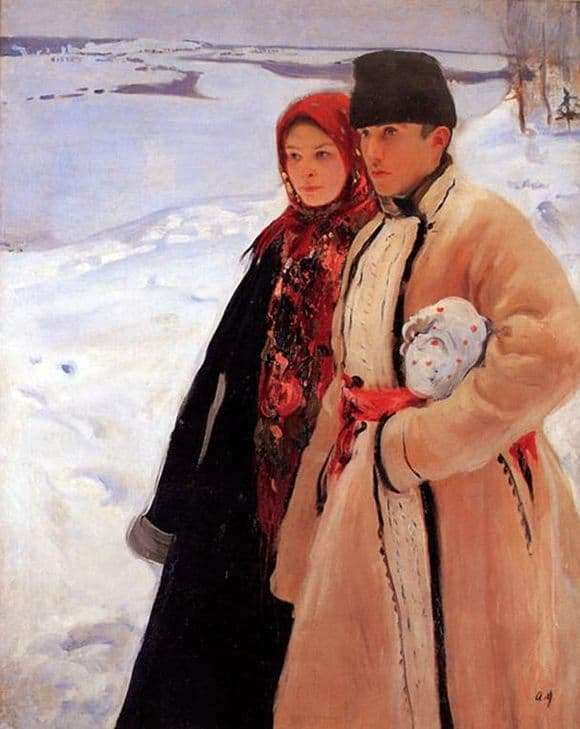 O. Murashko – a bright representative of ethnic painting in Ukraine. His fate was tragic, and the creative path is thorny. In his works, the artist displayed the life of ordinary Ukrainians, their life and customs.

The picture “Winter” tells the whole story and has a deep philosophical meaning. The guy and the girl in the winter day go by the hand. It can be assumed that they are together. For the heroes stretched infinite distance.

Young people are near the frozen river, on the shore you can see a few trees. Closer to the horizon is a strip of water.

Clothing characters displays the culture of the Ukrainian people. This is exactly what people looked like at that time in winter. Warm “covers”, sewn from animal skins, were reliable protection from frost in winter. The guy in the national Ukrainian hat, and the girl in the painted scarf.

Tied up with a red belt is also a Ukrainian tradition. The guy and the girl are dressed smartly and, perhaps, they go to visit, this is what the guy’s bundle says about the bundle, because the guests must come with a treat or gift.

In winter, the Ukrainian people celebrate many traditional holidays, and the history of their origin goes back to paganism. It can be assumed that the artist displayed one of these winter celebrations. The girl is very beautiful, but her face expresses sadness. The guy is serious and alarmed.

The emotions of the heroes of the picture reflect the real mood of the Ukrainians of that time. For harmoniously hiding sadness, subtle mood, subconscious sadness about the lack of freedom.