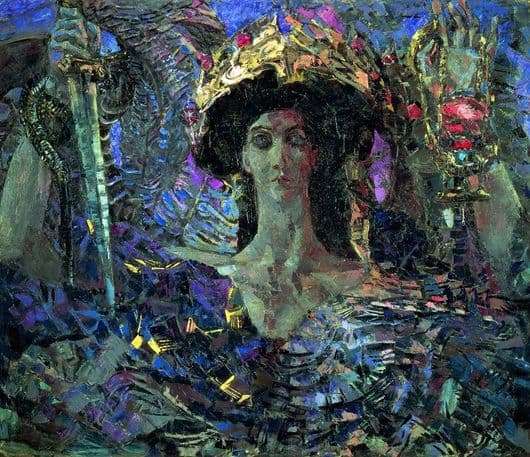 The canvas “Six-winged Seraph” by Mikhail Vrubel was written in 1904. The work of art was created by the artist in the hospital V. P. Serbian at the university. The work is painted on canvas with oil paints. This creation is known as “Azrael”, besides the canvas is called “Angel with a sword and a censer.”

It was as if the crown on the head of the depicted six-winged seraph was set on fire, sowing its way through the impenetrable darkness. Strong wings serve the precious glitter of stones. His face is permeated with cold and severity. The face is framed by dark hair. His neck is elongated and straight. Seraphim gazes at the piercing icy gaze of wide open huge eyes. His hands raised to the top.

In one hand he has a censer with a burning flame, and in the other, entwined with a snake, he holds the sword. With his whole appearance, the seraphim reminds of the heavenly world from which he descended. He is like an angel of death, reminding that nothing is forever in this earthly world. His glance speaks of the imminent reckoning.

The picture is similar to a crazy dream, where flashes of red, then blue and green fire appear every now and then. Cold colors ringingly notify the end.

The artwork is an illustration of the verse by A. S. Pushkin’s The Prophet. Earlier, Vrubel had already painted a picture, relying on Pushkin’s work. After that, the subject of the Prophet was wired for the artist.

Vrubel worked on the canvas already being sick. At the same time, he had the strength to put his soul and secret meaning into each stroke. This is after the last large canvas brush artist.

The overall style of the canvas resembles an ancient fresco In a work of art, brushstrokes having the appearance of a bright stained-glass window are woven together It seems that the picture is assembled from thousands of multi-colored mosaic particles. At the same time, it is cold, repulsive and mesmerizing, endowed with deep feelings of the author.