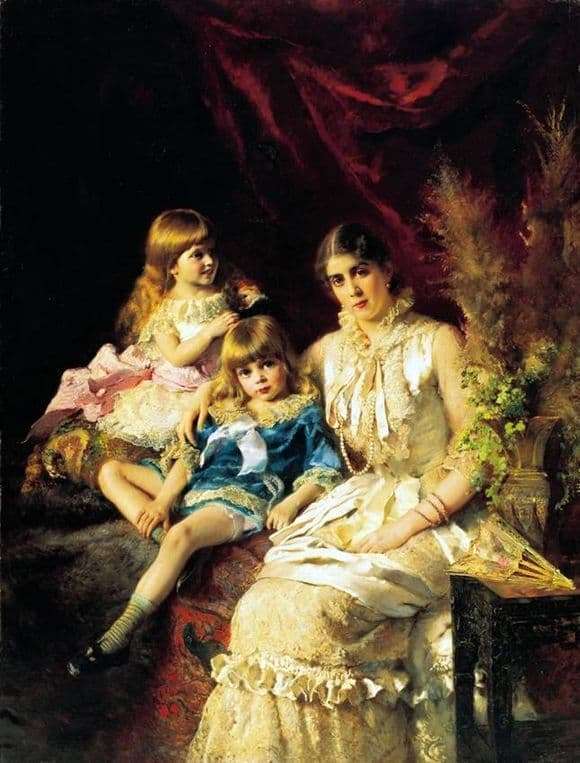 Konstantin Egorovich Makovsky bright representative of one of the most prominent families of the XIX century. His father was the founder of the Moscow School, and his elder brother was a famous ascetic. Love for painting manifested itself quite early. The canvas of K. E. Makovsky cannot be called outstanding and taking for the soul.

Unlike his brother, he is completely devoid of the desire to delve into the vicissitudes of the social struggle. He can be considered a fully developed “salon” artist, among whose works there are mainly portraits of his friends and acquaintances.

Far from realistic ideas about the world, characteristic of his elder brother, Konstantin Makovsky devotes most of his career to the Russian state of the XVII century. The artist is attracted by the rich painting of the royal chambers, luxurious robes embroidered in gold and pearls.

Particularly noteworthy is the painting entitled “Family Portrait”. The painting was created in 1882, canvas and oil were used to paint it. The main characters are the wife of the painter Yulia Pavlovna Letkova with children. The family is depicted in a relaxed, but at the same time not deprived of aesthetic beauty and even luxury surroundings. The young woman is wearing a white lace dress, her dark hair is arranged in a beautiful hairstyle, her eyes are wide open, her eyes are focused on the artist himself.

Her right hand rests on her knee, the left embraces the fair-haired boy in an expensive silk suit. The child looks straight and open, his body is relaxed, he is watching with curiosity about what is happening at the easel.

A little away from the nice little group, there sits a girl dressed in an expensive dress. She does not show due attention to what is happening, passionately looking at something that is behind the backs of the mother and brother.

Creating “Family portrait” the artist hardly adhered to the desire to create a realistic image. The characters are obviously embellished, the setting is made more attractive.