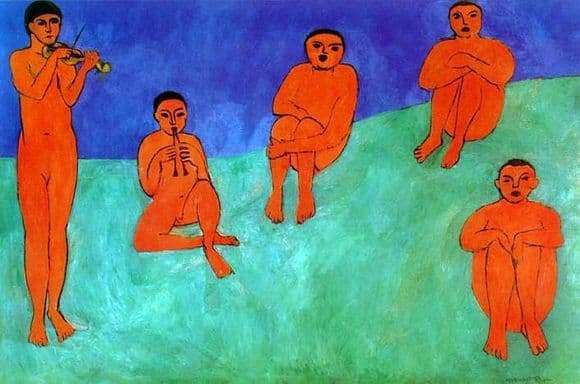 Schukin – a famous collector in the last century, knew Matisse well. In 1908, he decided to decorate his mansion in Moscow in a special way and invited the artist to paint two panels for the house.

It was necessary with the help of an allegory to depict such important arts as music and dance. The artist created a paired mural. The themes were close to the owner of the house, since concerts were often held in his house.

Before sending work to Russia, they were exhibited at the Autumn Salon in Paris in 1910. Such an unusual work of the artist caused a real scandal. Naked heroes and an unexpected vision of the topic surprised everyone. Schukin decided to initially abandon these works, but then changed his mind.

In the process of working on the figures of men, the artist sought to make them as simple as possible. All the characters are deliberately deprived of individuality. The features of their faces are almost identical, the same can be said about the physique. This is necessary so that the viewer can perceive this image as one unit.

The artist sought to achieve harmony of color. Matisse emphasized contrast. That is why he painted the characters in red. In order to balance the image, the paintings used blue and green colors. The background plays almost no role, so it is as simple as possible.

Before us appears five heroes. Two of them play, and three sing. Matisse reproduced the violinist’s position as clearly as possible, since he himself was a virtuoso musician. The men on this panel seemed numb. The silhouettes are drawn out by deliberately elastic lines to give the canvas a special musical rhythm.

Matisse was looking for the perfect compositional solution for a very long time. Scene corresponded them several times.

Some researchers believe that the figures on the right resemble notes, and a violinist can be a symbol of a treble clef.

The canvas is characterized by a fresh range of colors. Heroes are static and completely isolated from others. They are the most immersed in music.