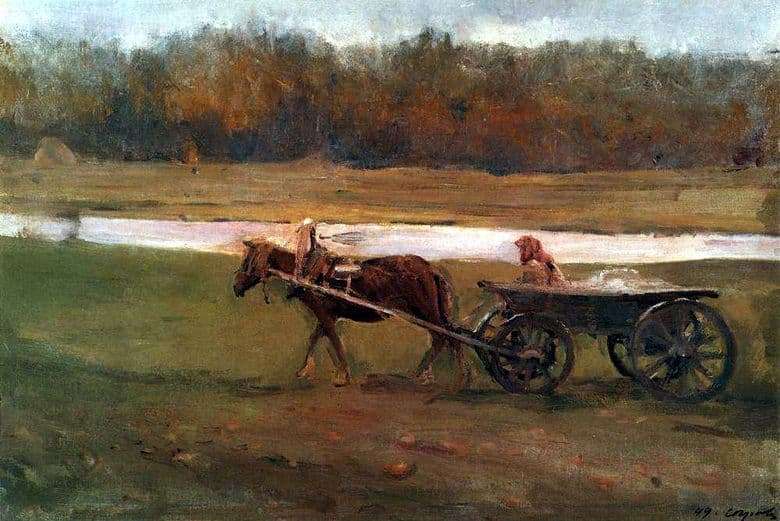 The Baba in the Cart is far from the most famous painting of the great Russian painter, undeservedly forgotten and overlooked. Perhaps the chosen plot and a certain uniformity of the palette make it not so memorable, compared to other masterpieces by Serov, however, it is not as simple and straightforward as it may seem at first glance.

In the foreground are the main characters of the picture – this is a wiry old horse, heavily plodding under the yoke, and a woman in a headscarf riding on a cart. Around them is the familiar landscape of typical Central Russian nature: the deciduous forest in the background is barely touched by the purple colors of the autumn, a small river cuts the plain in two, and there is a sheaf of compressed straw. The paints are chosen the most restrained, dull, inexpressive, as if in order to more strongly emphasize the ordinariness, the typicality of this plot, its dull routine.

And the horse, dutifully wandering into its stall, and the woman, driving her to the house, seems to barely notice what is happening around. One could say that the heroes of the picture are immersed in their thoughts, but fatigue does not give them time to think. Dullness from daily work, repeated from time to time, drives the heroes of the web into the same sleepy, melancholic stupor that encompasses the attentive viewer.

The hopelessness, simplicity of life and the inevitability of the coming end are reflected in this simple and, at the same time, challenging plot. The picture is among the most beloved and appreciated by Serov himself, who always with bitterness defended its value. According to the author, through his creation, he wanted to convey a common universal thoughtfulness, peculiar to a man endowed with reason, and nature in general, in all its manifestations: in living creatures, plants, even in the heavens and earth around us.