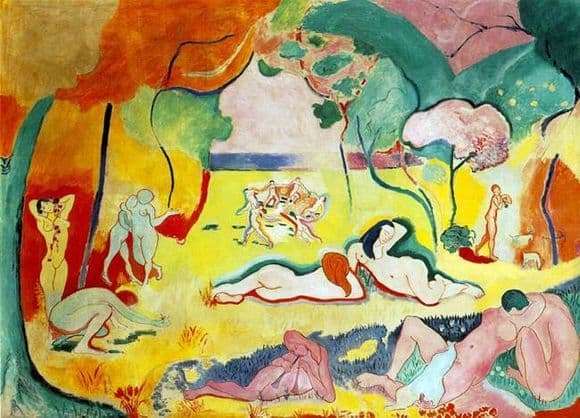 In March 1906, the second exhibition of representatives of Fauvism took place. It was impossible not to notice the bright large picture of the leader of the Fauves, Henri Matisse, called the “Joy of Life.” The artist began to work on it a year earlier, staying in the south of France. Gathering impressions in the more sunny part of the country, Matisse went to embody the ideas that had originated in a new workshop.

The rented room in an abandoned monastery turned out to be very spacious, and this, of course, influenced the masterpieces created here. Freedom of space inspired freedom of thought. “Joy of Life” is a canvas of more than two meters in width, absolutely new in style, not only for Matisse himself, but also for the visual arts in general.

Its distinctive features: large areas are painted in one color, the figures are summed up by distinct bold lines, the character of the image is similar to Persian miniatures and Japanese prints. The French painter skillfully conveyed a whole whirlwind of emotions with the help of the game of color and modification of forms.

As a sweet colored illusion, it absorbs the eye, clinging to the figures of dancing, playing music and lovers of embracing couples. The backdrop for vacationing people is the sky, sea, beach and thick trees. Spots of bluish tint, green, orange and blinding yellow give rise to harmony and a sense of celebration in the soul. At the exhibition “Joy of Life” acquired a collector from America, Leo Stein. Now the canvas is exhibited in the USA in the Barnes Gallery.