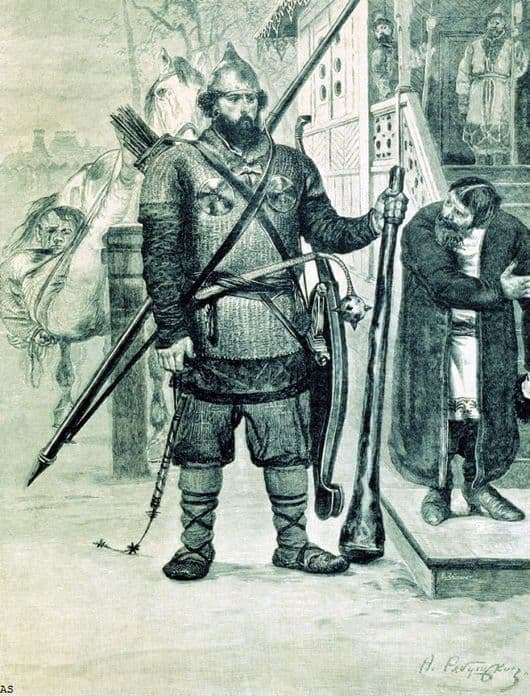 The theme of historical and everyday painting has always been popular and interesting among art lovers. Andrei Petrovich Ryabushkin was a Russian painter who, with his works, conveyed the mood of the Russian people in the 17th century. The artist becomes an orphan from the age of 14, and he is taken to Moscow for training. The Moscow Art School became a second home for Andrei Ryabushkin.

Since childhood, there has been a revival of the love of the creator for painting. Therefore, after college, Ryabushkin quickly went to St. Petersburg to begin training at the famous Academy of Arts. All the works of the artist were filled with his perception of the Russian world and nationality. The village theme was traced in the works, as if Andrei Petrovich was personally present in the events of the past. A key example was the work “Ilya Muromets” – an example of a warrior who defended his homeland.

The hero is depicted in full growth, in his armor and weapons. The majesty of the warrior Ilya Muromets is so pronounced that when communicating with an old man near a noble house, it seems that the heroic might is. The picture is depicted in a graphic style that makes the outlines of the figures accurate and visible. The epic theme for Ryabushkin is a big cycle of brave heroes.

The heroes of that time were real or fictional, nobody knows. But all the boldness that illuminates them in painting, convinces of the authenticity of the heroic deeds. The work shows that the hero after the battle came to the king with a prisoner. The enemy is defeated, and so Ilya Muromets, ready to go into a new battle. The strong knight of the warrior is hidden behind his broad back, but the viewer understands that this is his faithful assistant.

Creativity Andrei Petrovich Ryabushkina successfully based among the creators of epic painting. Historical moments of the life of the people perfectly reflected in the works of art. The style of graphics allows not only to make images of human faces, but also to retell the sensuality of an artist who writes about Russian life.