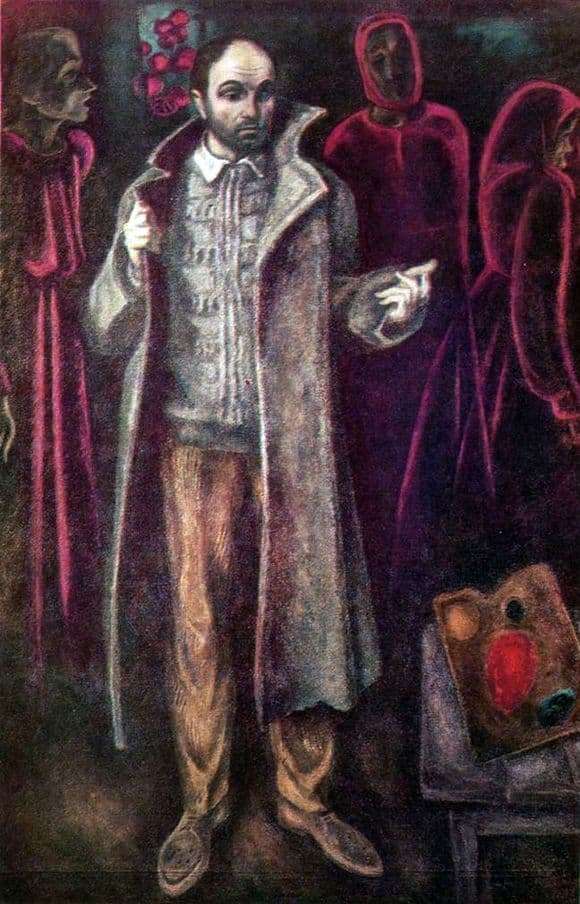 V. Ye. Popkov is an artist who works in his own manner of painting unlike any other. The painting “Father’s Overcoat” is not just a household story of fitting in a wardrobe, this work reflects a deep philosophical idea.

After finishing the work on the painting, the artist did not take off his overcoat for some time and even cried. The painter displayed a question that tormented him for a long time. He survived the war as a child, and his father defended his homeland. VE Popkov himself overcame all the war and in his heart suffered the losses that the people had gained after these terrible military events.

A man tries on his overcoat, scary memories catch up with him. He looked down and seemed to stop. The artist has depicted behind him three blurry figures, which symbolize the memory of terrible events. Despite the lack of clear lines, one can make out that the figures are female. Three women of different

ages settled down behind the hero. An elderly woman walks away, a middle-aged woman looks sadly on her face with grief, and a young woman shouts something.

The painter is very realistic conveyed the tragedy through the female characters of the picture. The man tried not just his overcoat, he tried on the whole burden of wartime. His thoughtfulness speaks of doubts as to whether he can overcome and survive all that the soldiers of that time experienced.

The artist was worried about the question, were there such victims in vain? Does the new generation evaluate the feat of their grandfathers? He appreciated the feat of his father and kept his overcoat with gratitude for everything. Working on a painting, he always put on his overcoat. He passed all events through himself. The palette lying on the stool, speaks about the profession of the protagonist.

The stool is modest furniture, which speaks of the meager existence of the artist. Home decoration is a lonely picture in the background, most likely, made personally by the artist. The master has been tormented by the thought all his life, but is his father’s overcoat on his shoulder or is he not worthy of trying it on?