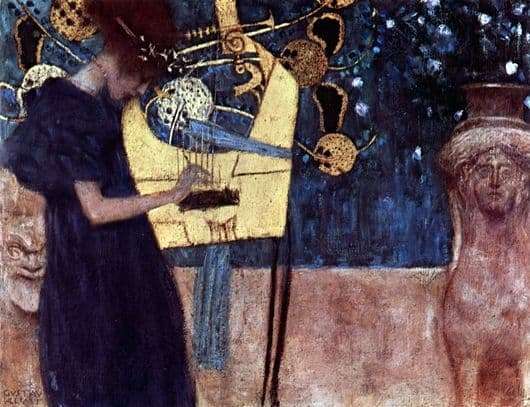 The idea of ​​synthesizing methods of music, painting and literature permeates all the creative practices of symbolism, to which many artists of the era of the turn of the century addressed. This fate did not pass and the Austrian artist Gustav Klimt, in the paintings of which (“Music” in 1895, the cycle “Beethoven Frieze”) clearly shows interest in art as a means of re-creating, evolving the world.

“Music” depicts a young Greek woman playing a lyre, in whose guise the features of a modern Klimt resident of Vienna are guessed. Contrast – the main compositional feature of this canvas. It can be seen, for example, in the deliberate opposition of the dark dress of the girl and the bright appearance of the instrument. In turn, the picture space, which depicts a Greek woman surrounded by bizarre patterns that resemble notes from afar, comes in contrast with the emphasized emptiness of the other plans. On both sides are stone images of the demon of fertility Silenus and the Sphinx.

The image of the latter can be interpreted in different ways, for example, as an indication of the creative freedom of the artist. This statement was especially close to Klimt. And stone sculptures, and the lyre, a famous symbol of the god Apollo, patron of art, refer to the era of antiquity. According to the Symbolists, it is precisely this that conceals untapped resources capable of renewing modern art, but this requires some new unfamiliar look at the era when human thought was still in the cradle. Perhaps this is what Klimt meant, specifically juxtaposing the modern and ancient worlds in the picture.

Despite the fact that “Music” refers to the early works of the artist, it already shows the features of Klimt’s mature manner: the use of two-dimensional space, a specific color spectrum. This creates an indescribable feeling of transcendence, unreality of the image, which is so attracted to the paintings of this artist.