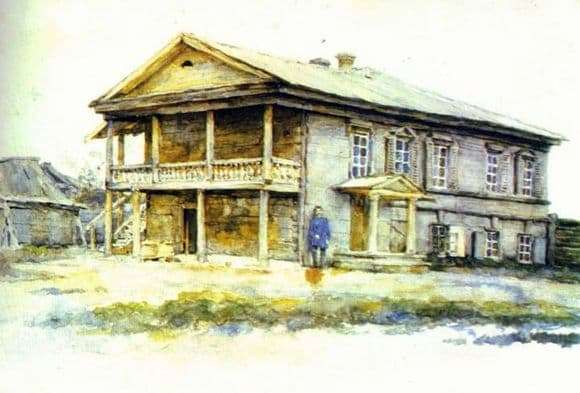 The painting “The House of Surikov in Krasnoyarsk” was painted by Vasily Ivanovich Surikov in 1890. The style of the work can be attributed to realism, the genre of performance – to the urban landscape. Materials for writing a picture served as a pencil, watercolor, paper. The size of the canvas is only 24.5 by 33 centimeters.

Almost the entire area of ​​the picture is occupied by the image of a two-story wooden house with many windows, in front of which stands a little man in simple blue clothes. There is a lot of so-called “air” in the picture, that is, free space, bright spots. This creates a feeling of freedom and lightness, thus, and without that small canvas is not overloaded.

Foreground and foreground are not given much importance, all attention is left, in fact, for the house itself, which, one can say, is the main character of this picture. Surikov lived more than half of his life in the capital, however, this particular Krasnoyarsk wooden house remained in his memory as his own. Who knows, maybe it happened because it was more comfortable there than in all subsequent dwellings of the artist, maybe because some particularly vivid childhood memories are associated with this house. Anyway, the House was written with great tenderness and love.

The building was built of larch, the creator of it was the father of Vasily Surikov himself. During the construction, interestingly, no nails were used at all. Currently there is a museum there. But back, in fact, to the picture. Near the house is a man. Who is this person, whom Surikov depicted standing, leaning on the wall of the house? It can be assumed that the artist wrote himself. His attachment to this house was so great