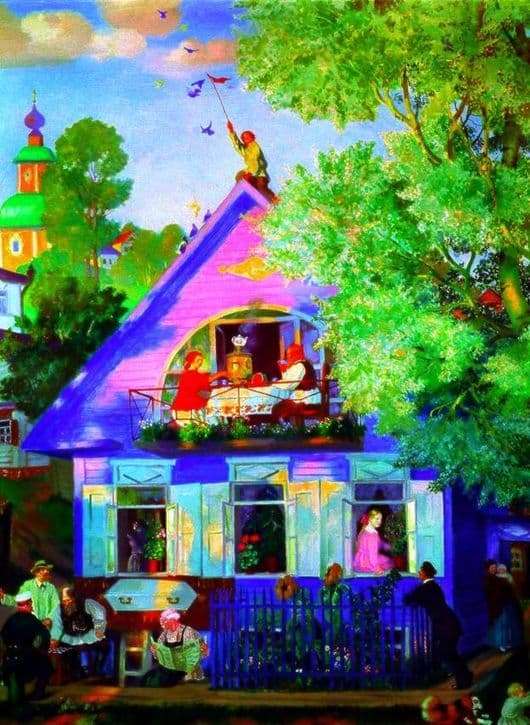 The canvas was written in 1920. A home for an artist is not just an architectural structure that needs to be completed, while maintaining the proportions of the clarity of the lines – this is life itself, spouting from all doors and windows. Here and in the picture Kustodiev “Blue House” all the same.

A house painted in pure heavenly color and the people it unites leads to one place so that they can feel their integrity, not only with this house, but also with each other.

Home is the place where the beginning of human destiny goes, which, having brought thousands of trials, will bring him back here to take the last one on the road. Understanding this, the artist depicts not just a house, but the whole human life. Therefore, the researchers of the picture believe that understanding it is possible only in the case when it is started to be considered in parts, according to the planned layout of the characters.

So, in the foreground are shown ordinary people of various professions who play chess, as if playing a game of their life, which still ends in an undertaker’s shop, located in the basement of the house. The Undertaker is the end of the journey, but its beginning can be seen at the very bottom of the picture, where little children are almost invisibly placed playing with a dog.

Further, the artist depicts a loving couple, showing that life continues, and as a result, around the corner of the house a woman with a baby is shown, undoubtedly symbolically resembling the Mother of God with Jesus in her arms.

At the very top, on the balcony of the house owners tea, gathering around a samovar. Everything is perfect and beautiful, the table is richly served, the pots of flowers are fragrant, but these people will also come to the undertaker’s shop.

On the roof, the teenager frightens off the pigeons, he is above all, because he does not know either the dream of a couple in love, not the mother’s anxiety, not even the problems of people gathered around for tea and play, he is completely carefree, and therefore perfect. This boy is the youth and strength of the Russian people, not desponding to any misfortune.

The picture is filled with light and happiness, everything here is harmonious and joyful, and what else is necessary for the human soul.