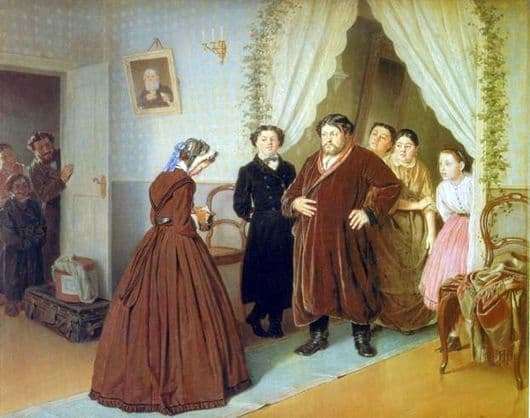 The governess arrived to the rich house – eka nevidal! But in fact, although this situation was quite ordinary, it was still perceived unusually.

The well-to-do people accepted into their homes a woman who would teach their children the necessary manners. Such rich gentlemen, as a rule, had no idea about whether the earth was round and on which it stood. Not to science them. And they want to make their children by scientists – who would want a different fate for their child.

They have their own worries, they have their own affairs – the mother lives in pleasure, she drives her tea, gossips. Manners are not specially trained, and why should she have it all. Father, and even more so for French manners, is pointless to learn. And although both parents don’t see much importance in this lady, they want everyone to have “as people”.

Reception governess is not warm. Unhappy bows to the merchant, and he looks suspiciously at her – who is where she came from. He condescendingly glances down at her, immediately indicating to her her place in this house.

Next to the father of the merchant’s son. He is a young man, haughtily, but with undisguised interest is studying a new woman in their house. For merchant hid merchant and their daughters. All with interest consider guest. Lack of upbringing of them is visible to the naked eye: in surprise, the lovely young ladies even opened their mouths.

On the left side, another servant of the merchant house gathered in another doorway. Those with the same interest glance at the young lady, but there is no arrogance in their views. A lady with high manners will soon join their classes in this house and replenish their company.

Why merchants daughters French manners? But now the governess’s business is to teach them the language, the high society manners of behavior, sewing and embroidery – to all the girl hobbies of that time. Could she imagine that having received an excellent education, would be here? Alas, the governess hardly expected such a fate…