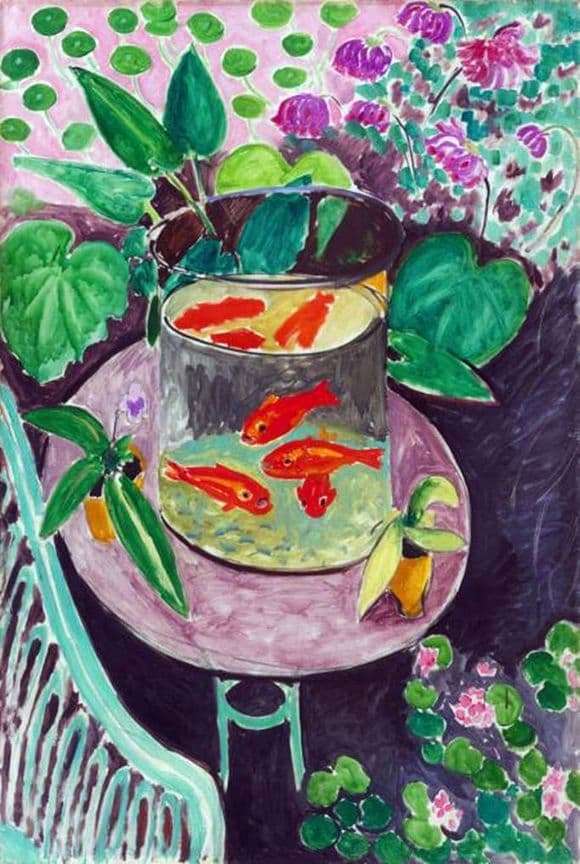 Matisse is a famous French artist, the leader of the Fauvist movement, which lasted only twenty years, but left a peculiar mark on history, Fauvism is related to impressionism and brings it to an extreme point, in which the form stops playing and its emotion and color begins to play.

Fauvism is extremely simple, not fixing on any framework. Light brush, thin strokes, play with light and shadow, bright, sometimes screaming, colors – all this is necessary only for the expression of emotions. In Matisse’s picture, a woman could have a green nose, if it gave her expressiveness, and when she asked why it was acceptable, if women’s life wasn’t exactly green-nosed, he replied: “I’m not drawing a woman, I’m painting pictures.”

“Red fish” – not the farthest from the realism of his picture. At first glance, it seems even quite understandable and normal. Aquarium,

fish, flowers and green leaves, nothing that might seem unusual. But it is worth taking a closer look, and it turns out that the picture has a visually impaired perspective. The spectator sees the aquarium from the side, just like the table leg, but the tabletop is from above, otherwise it would not have seemed so round.

The fish in the aquarium float in a circle – they are red, pop-eyed, with open mouths – and this circle supports the shape of the table, and the curling greenhouse fencing, and the plants, which also form a kind of circle. The colors of the picture are rather soft, compared to the riot familiar to Fauvism – almost muffled, and the picture itself conveys a mood, and does not tell a certain plot.

An imagined spectator can see in her symbolic infinity – what is a circle, if not she? – to feel the lyrical mood of the artist, who thought about how nothing has neither beginning nor end, and placed the fish in the aquarium in order to convey this brief moment of insight.