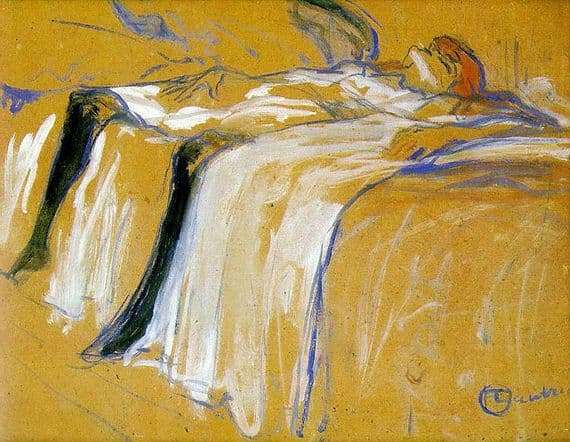 Peer into the picture… loneliness.. hollowness and fatigue. As if all this woman’s life fell on her fragile shoulders at once. Looking at the picture, I want to ask her about what had so drained her in life, so heart and soul drained.

One of the cycles that were devoted to women of “easy” behavior became a cycle called “They”, where his attitude to everything that happens is becoming clear. No, he did not despise them, he admired them, loved them, but could not know because of illness.

The role of this woman in the picture is not clear, but it is clear that her tiredness and weakness are caused by her endless labor. Her hands are thin and lifeless, lying one on the leg, the other – on the bed, as if tired of flying wings. The faces are not visible, since the essence of the picture is not in the image of appearance, but in emphasizing the purpose. The artist loves his creations, he loves the present, so he does not try to portray a fantasy, but depicts real events, without hiding vulgarity and contempt. Thus, igniting among critics whole fires of words and tirades, but this does not stop him.

The picture is imbued with loneliness and sadness, as if the woman no longer thinks about anything, but simply lies with her eyes closed and dreams that everything will be over as soon as possible.

All the thin lines of the body attract the gaze to her, but her dark legs clearly tell us that it is they who bring her to this spiritual solitude, the desire to find peace. The picture is filled with gestures as if the artist did not draw, but showed us what we should pay more attention to and what is not worth it. Looking at the picture, the viewer himself wants peace and a little loneliness in order to be left alone with his thoughts.