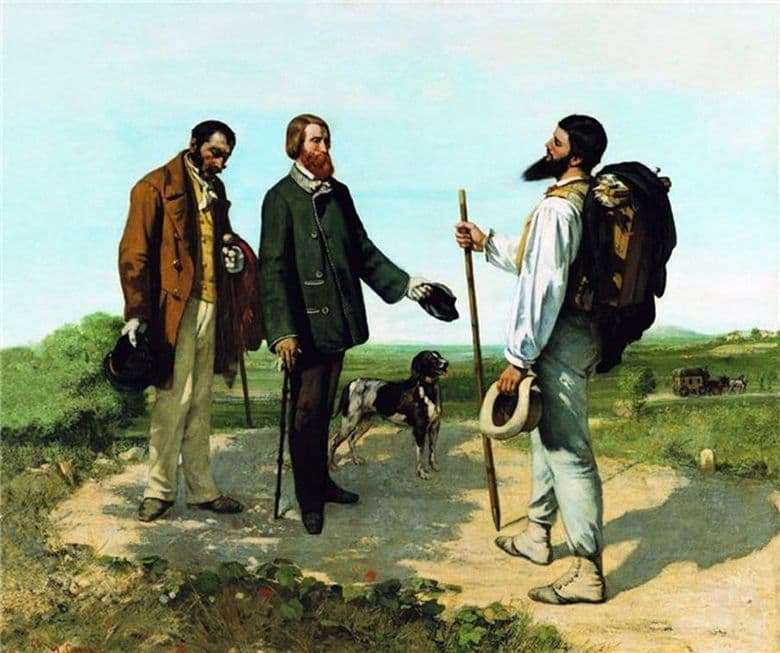 At the Paris exhibition, the realistic picture became an event. The artist felt himself a pioneer, making the central theme of works of art of his contemporaries engaged in everyday activities. Of particular weight and expressiveness of his canvas gives the fact that in everyday fact, he sees a generalizing value. The veracity and realism of the picture shocked the public. The artist announced the rejection of the conventions of academic art, from historical and literary subjects in favor of real life.

The plot for the canvas was a real case from the life of Courbet himself, who was invited to Montpellier in the spring of 1854 by Alfred Bruille, a famous patron of art and a collector of paintings. He was greatly impressed by the paintings of Courbet, and he wished to order him his portrait. The artist captured himself on canvas in the minute he met him on the road to Montpellier with Bruille himself and his servant accompanied by a dog.

The road covered with dust, winding around the ribbon, visible around the corner of a cart with horses, squalid houses in the distance, stunted greens along the edges of the road – everything is written out carefully and in detail. Paints are not bright, it is a lot of light tones. The depth and blueness of the transparent sky with light clouds floating in the sky is amazing.

The final site on this road Courbet proceeded on foot. The painter looks like a real traveler, he is dressed on the road – in a light white shirt and pants, a yellow vest, behind him is a heavy sketchbook on which he hung a cape on top, in one hand a staff, in the other – a hat taken from his head as a sign of welcome, despite the warm sunny day and the burning sun.

The poor painter is greeted by a wealthy patron with admiration who is elegantly and fashionably dressed, also leaning on a cane. The common details of both (and they will later become friends) are beards of a similar shape, but differing in color. It is symbolic that a rich collector takes off his hat to a poor talent as a sign of reverence for his talent.