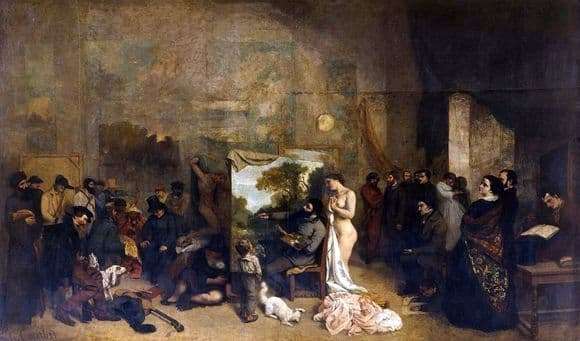 The painting “Artist’s Workshop” by the French painter Gustave Courbet was painted in 1855 with the use of oil paints and canvas, whose size was almost 6 meters long and at least 3.6 meters wide.

The canvas was written for the opening day of the World Exhibition in 1855 and became the main exhibit of the “Pavilion of Realism”, created by the artist to contrast the works of other French artists presented here.

The picture had a second title, longer and more complicated: “A real allegory characterizing the seven-year period of my creative life.” The second title is a more accurate mapping of what is shown in the picture, for the writing of which dark colors and colors were chosen.

The central figure of the canvas is a seated sideways man – the artist himself. He has brushes and paints in his hands – he writes a huge landscape and is busy with work, does not pay attention to anyone.

A lot of different people gathered in the artist’s workshop. Thus, a half-naked girl, most likely a model, stands behind his back, and at her feet, contemplating the resulting creation, a small boy stands, next to whom a white cat plays.

A lot of people crowded the right side of the picture, but not all of them are watching the creative process, many people seem detached and indifferent, what is happening here is not interesting for them.

It is their artist who calls his enemies, those who are trying to prevent the realization of his creative dreams and aspirations. Indeed, people in this part of the picture are engaged exclusively in each other, or themselves, they talk, look thoughtfully into the void, and even read books.

In the background you can see a couple embracing.

In the left part of the picture, people are also busy with themselves, but still show some interest in what is happening. According to the artist himself, all the characters were created by him to describe his creative life and work, each of them symbolizes something.

It’s no secret that the artist’s sister, his former sweetheart, who was soon removed from the canvas, and even Emperor Napoleon III himself, his artist blamed anti-revolutionary and anti-republican actions, found their place in the picture.

Much attention in writing the picture was paid to the play of light and shadow. Despite the fact that the canvas is dark, it does not interfere with the features of the faces depicted in the picture, as well as almost all the small details. The greatest light is given to the model of the model and the artist himself, all the other characters are hiding in the shadows, which does not interfere with seeing not only them, but also the walls of the room.