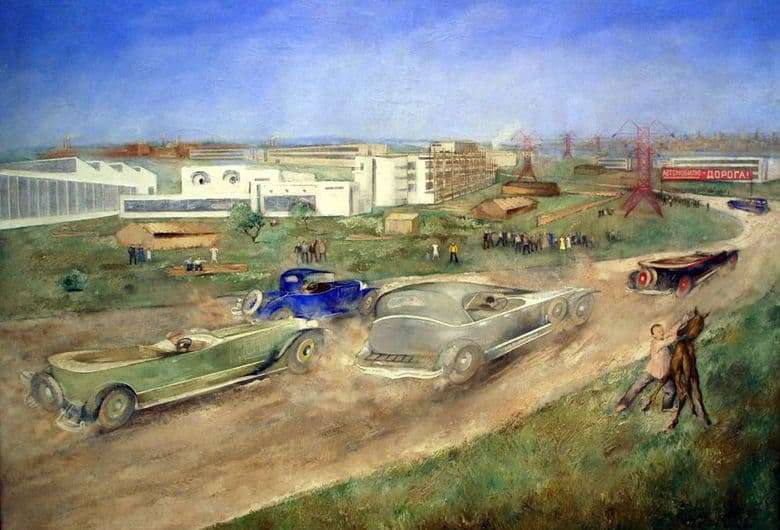 Peter Vladimirovich Williams was born in Moscow in the family of a scientist. His grandfather was the famous American engineer Robert Williams, who remained in Russia in the middle of the nineteenth century. Initially, he was preparing to become a physician, but the desire for creativity prevailed. He worked a lot as a theater artist, during the Great Patriotic War he became the main artist of the Bolshoi Theater. The works of Williams are characterized by contrast, expressiveness, conciseness, monumentality of writing.

“Automobile race” – one of the best pictures of Peter Vladimirovich, by genre belongs to the early avant-garde. For the artist of this period was characterized by the romanticization of socialist reality. Most of the paintings by Williams, excluding, perhaps, portraits, combined fragmentarism of the image with the dynamics, allowing to create active, vivid images.

Light, dusty road crosses the road diagonally. In clouds of smoke and dust on the highway rushing elongated, heavy cars, reminiscent of some fantastic animals. Their form and some deformation create a feeling of furious speed, desperate progress. The race is watched by spectators huddled on the side of the road in the distance. The rally takes place in the factory area, power transmission towers complement the picture of society engaged in industrialization. In the foreground is a boy, with the last of his strength keeping in check the kicking foal. This image symbolizes the technical development of the country, the progressive movement from the past to the present. Soon, living horses as a means of transportation will be a thing of the past, and steel “horses” will flood the roads. Also thanks to this pair, the picture acquires a somewhat grotesque, satirical shade,