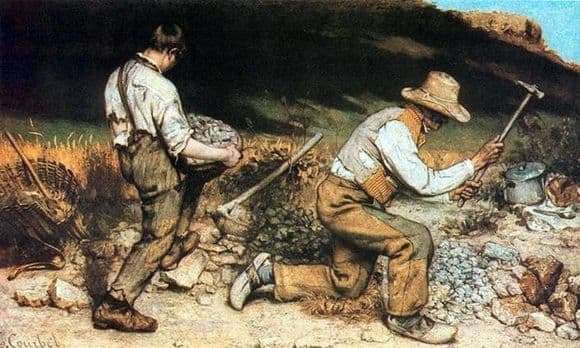 The work of Gustave Courbet “Crushers of stones” tells about the deep poverty that can only meet on the way out of town. The artist himself said that he was returning from a trip when he saw these two.

Only adversity can make a person do this. Being a lover of the most unexpected way for his canvases, Courbet got the idea to paint them. Making an appointment in his workshop, he proceeded to the execution of the painting.

Unfortunately, the original of the painting was not preserved, as it was destroyed during the Second World War. Being in one of the galleries of the city of Dresden, which was subjected to a massive bombardment, the picture turned to dust.

The first one of the characters striking is the old man in a wide-brimmed hat. Being engaged in the construction of the road, which requires material, it crushes large cobblestones into small stones with a hammer. From under the hat you can see what this work leads to. Thin cheeks, a sharp nose and unhealthy skin color. His shoes have holes from which bare heels peep out.

Grinding another cobblestone, the old man gives his remnants of the young worker – the second character of the picture. There is even more difficulty waiting for Togo – bringing a basket with stones to the road under construction. He has neither a cart, nor any other device to transport the load. It remains only to carry one heavy basket after another. His robe is not much different from the old man. Torn rags expose his thin, tanned body. Next to the young man are already torn baskets. This once again underlines how hard the work of these two is.

The meaning of the picture was as follows: those who start like this end also. This is exactly what the artist said when he demonstrated his brilliant creation.