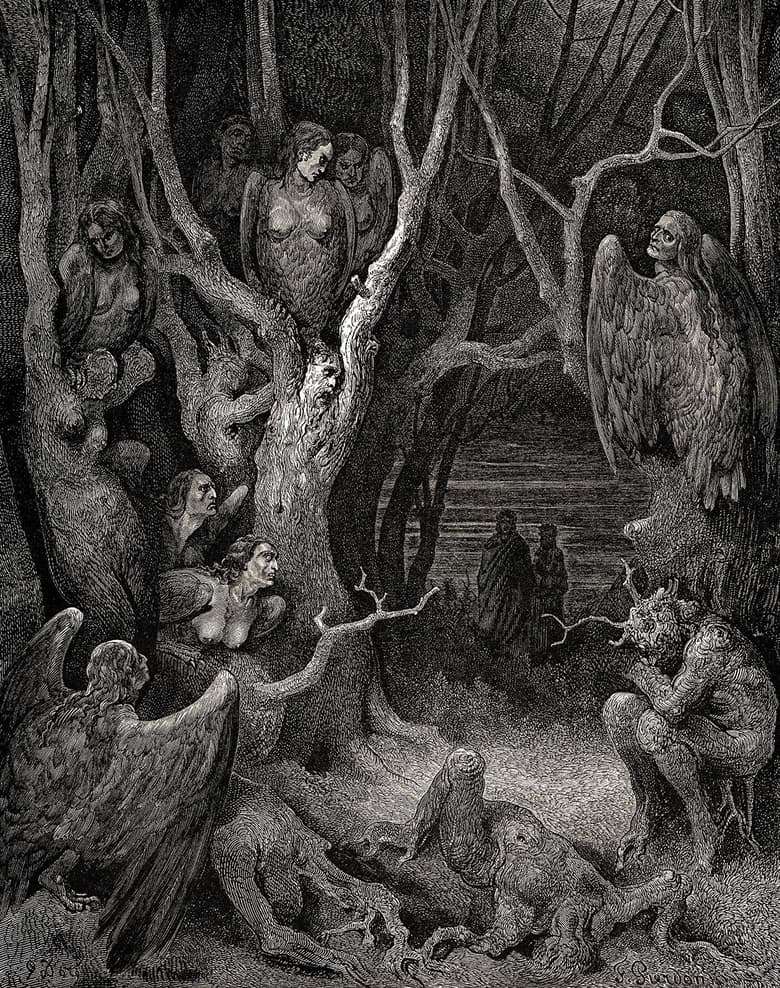 Description of the illustration by Gustave Dore “The Forest of Suicides”

Throughout his entire creative life, the artist has created more than 500 illustrations of famous works, including fairy tales and biblical scenes.

The first illustrations of the Divine Comedy, Dante Dore began writing at the age of ten and continued over the years. This long-term work has become one of the most memorable works of the artist.

In the illustration, “The Forest of Suicides”, Dore depicts the seventh circle of Hell, described by Dante. The people who committed violence against themselves are embodied in trees, curved, naked, and exhausted.

Harpy and Greek mythological creatures with the body of a bird of prey with a bare female breast and human face are sitting on the branches of these people – trees. They move from branch to branch, causing unbearable pain to martyrs, reminding and punishing them for their acts. Every movement of the harpy is aimed at the torment of trees.

The dense forest of people – trees is depicted with an impressive feeling of disgust and pain. The harpies seem to grin, with zeal stomping their paws and clawing each sprig of sufferers with claws.

The pseudo-romantic style in which Gustave Dore worked, is striking by careful drawing and selection of the smallest details. He didn’t just portray what his fantasy gave birth to, but brought it to full realism that the viewer did not arbitrarily become an eyewitness.

Dore is so gifted with talent that even without art education, he got his first job at the age of 15. The illustrations created by him, made their way to the depths of the soul.

Having become a mature artist with age, Dore continued to create inspired, absolutely fantastic works that clearly demonstrate the depth and grief of what is happening from the inside of the plot.