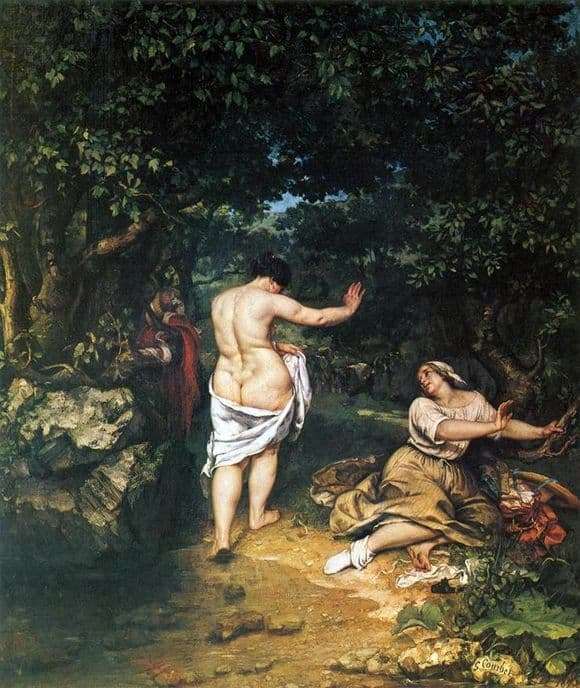 The scandalous picture of Gustave Courbet “Bathers” caused a wide public response when it was presented to society. The artist has violated almost every conceivable tradition, adopted in depicting people, besides women.

Exaggerated proportions, extremely unusual and even disgusting for viewers of that time, refusal to please aesthetics to keep silent about the existence of dirt on the bodies and, moreover, a complete, absolute lack of plot. The picture simply depicts bathers who do not do absolutely nothing.

The poses seem to hint to us that there could be some kind of plot, but it is not here, and at that time it was considered an unspoken taboo to draw the almost nude body of a non-mythical character. At the same time it is impossible to find fault with the skill of the artist – an abundance of small details, realistic light and shade, careful study, confident strokes. For this and other similar pictures the artist was hated and despised, and many famous people loudly expressed their negative opinions about all his work.

The following circumstance seriously aggravated the attitude to this picture: a hint of Mary Magdalene in the pose of a girl who stretched out a hand in front of her is visible to the naked eye, which is simply blasphemous and could not but cause a maximum censure. Courbet was an artist who was significantly ahead of his time and rudely broke down the existing framework and stereotypes, not caring about his own reputation and well-being; and it was this that made his contribution to realism and nude painting particularly significant.

A wave of indignation that stirred up the entire artistic community, as well as great minds that had moved many from art, began the process of changing consciousness, made people think about the boundaries of normal and acceptable, and despite the fact that those who wanted to destroy them repeatedly tried to destroy them, most of them settled for many years in private collections and Courbet remained incomprehensible until the end of his life, he continued to do his important and necessary work, expressing himself through protest to the long-standing foundations.