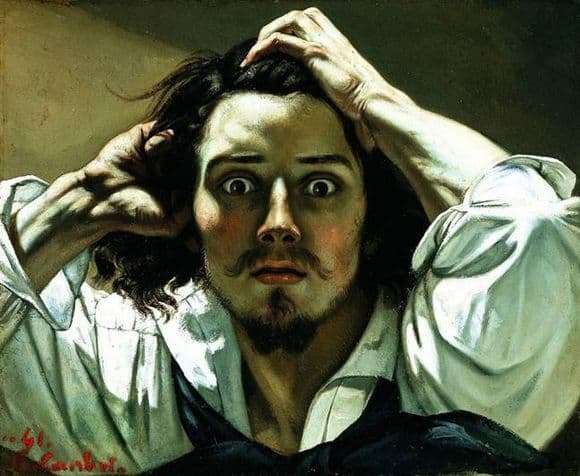 Looking at the work of the French artist Gustave Courbet, there is no doubt that he was the most ingenious master of the portrait. And he wrote not only portraits of other people, but himself, and wrote a lot of them. A sort of model for himself. From the image to the image, we see how it self-improves, improves technique. If you look at the portraits in chronological order (not forgetting, of course, about this work), you can understand the era in which Gustave lived only by one person.

There are pictures that delight. And there are pictures that lead to indignation. The Frenchman in his works was able to do both, and sometimes with the same picture. In this self-portrait, however, there is nothing shocking, although the work is also called “Despair” (or “Desperate”). Perhaps you can say that this negative emotion is wonderfully conveyed here.

What do we see in the portrait? A very young man, 20-25 years old, with wide eyes. A somewhat deadly complexion, with pinkish, cheeks at the same time, dark (probably brown) hair, mustache and beard most closely reflect the emotionality of the image. And hands randomly raised to the head vividly express despair, and maybe even some kind of fear.

The paints used by Courbet are very sullen, the background is gloomy, but this does not repel the viewer, but rather, on the contrary, attracts, in spite of negative emotions. The horror that can be seen on the face with the naked eye, attracts attention, paradoxically. And this once again confirms the skill of the artist, who has registered each line so subtly and sensually, that I want to look at it.