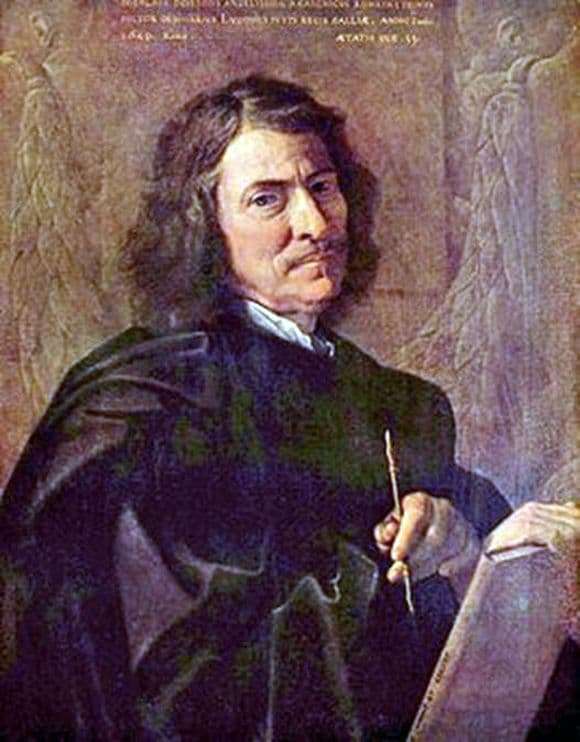 The painting was written by the founder of such a trend in painting as classicism, in 1649. Nicolas Poussin was famous for his ability to reveal the themes of the modern era for him, often addressing the themes of ancient mythology. He tried to show examples of high morality and valor, and also tried to cultivate in his contemporaries an understanding of a perfect personality. In his work throughout his life can be traced consistency, as well as moral and ideological orientation. This was one of the reasons why creativity was recognized as a benchmark for art institutions in France. He painted his self-portrait in 1649, depicting himself at the age of 53.

In the center of the canvas is Poussin himself, dressed in a black robe that closes it tightly. Under the throat, a small white collar separates the black fabric from the skin on the neck. The long, tight sleeves of the garment reach the wrists, tightly pressed against the skin. He holds a book in his right hand and a pencil in his left. It looks as if he is going to sketch something he looks at. And his dark eyes look exactly at the viewer.

Dark, almost black hair falls over the shoulders, gray hair has not crept into them yet. A neat mustache with a thin line is located above the upper lip, on the rest of the chin there is no beard or bristle. His gaze, directed beyond the limits of the picture, is calm and as if studying one on this side of the picture. Black eyebrows and small wrinkles, already appearing on the face of the gentleman, do not spoil it at all. Behind him is a brown wall on which nothing is depicted except the relief carved on it.