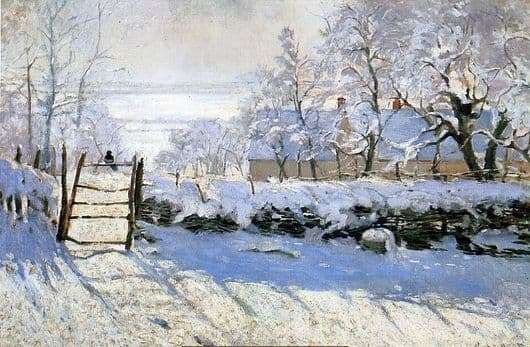 The Magpie is a painting by Claude Monet, written in 1968 and now in the Paris museum of Orsay. At first glance, the picture seems very simple, it depicts a fence sitting on the gate of forty, fruit trees, a house on the side and snow. It is seen that broad and quick strokes were applied to the canvas. But this visual simplicity literally fascinates the viewer, makes you look into the image.

The white color that Monet uses is special, unparalleled in painting. Against the backdrop of a snowy landscape, Monet plays with light and shadow, creating a special sensual atmosphere of a cold day. The image is like a translucent. The subtle transition from light to shadow fascinates. Monet uses to paint a picture only dull, but at the same time brilliant shades. This picture is considered to be a kind of analogue of the poem A. S. Pushkin’s Winter Morning.

Working on a snowy landscape is very difficult, but Monet was inspired by Pissarro and Renoir. He is overwhelmed by the desire to show the viewer a simple landscape that falls into the soul. Before Soroka, Courbet took possession of the winter landscape genre, but his picture is more lively, revealing many details to the viewer: people, horses, dogs, and only then snow. Claude Monet departs from the liveliness of Courbet and prefers to depict in the picture only one little magpie, clumsily perched on the fence. She accidentally appeared in the picture and does not attract much attention to herself. The painter calls it a “lonely note.”

The simple picture, without bright strokes and details, was not accepted by the artist’s contemporaries. The public of that time was completely accustomed to other pictures and was not ready to accept the lightness and beauty of the winter landscape. Paris Salon rejects this creation by Claude Monet. Later the picture is accepted, classified as impressionistic and placed in a museum.