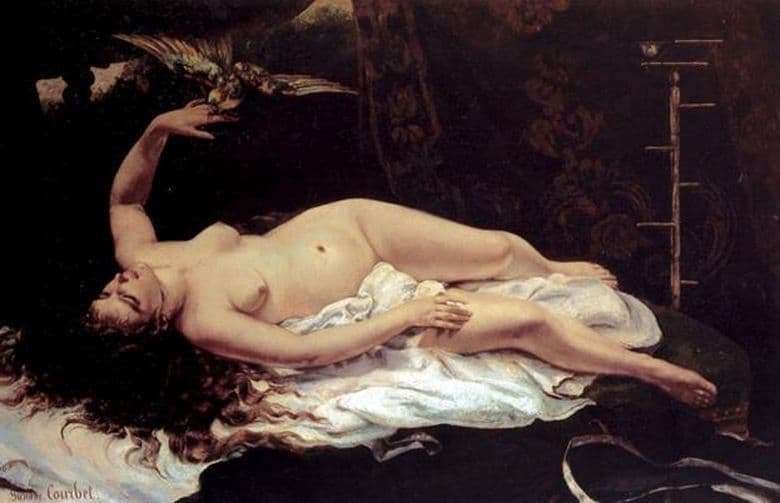 The canvas was presented at the Paris Salon in 1866 and immediately won success with the audience, who were always attracted by the beauty of the naked female body. There is an assumption that the Irish woman became a model, serving as a model for other painter canvases.

The entire main plan of the picture is occupied by a young girl with a wavy dark hair that is spread out on a bed, carelessly spread out on a bed. It lies on its back, turning slightly in a half-turn and covering a small part of its leg with a snow-white, strayed folds with a veil. Her left hand is raised and gracefully turned with its back up, a bright motley bird crouched on it, wings spread wide, as if ready to fly away at any moment or wanting something to tell the beauty.

To the right of the bed is a shiny metal parrot stand. The artist realistically conveyed the brilliance and halftones of polished copper. In his work, Courbet studied everyday pictures of life, freeing them from various philosophical, moral, and political considerations, schemes, and conventions. Behind the woman, a carefully painted old carpet is visible, but it is in the shade, and its drawing is barely marked to give the impression of a semi-darkness in the room, where the only bright spot is the beautiful female body. As if shining gentle skin strikes with naturalness and purity.

The girl does not cause gross emotions. Her beauty gives rise to admiration, not lust. She is not a servant, not a slave or a romantic character. This is a simple-minded ordinary girl, resting, lazily and lonely, sprawling and playing with her pet. The coloring can hardly be called diverse: it is minimized to the key tones. White, green and warm brown predominate. The only tiny bright accent becomes the plumage of a bird.

On the dark background of the carpet with a barely noticeable ornament and a landscape barely translucent in the distance, the naked body of the girl stands out even more spectacularly. It radiates a relaxed and instinctive passion, which the artist has skillfully managed to convey. Critics have noticed that the heroine of the picture looks very modern and called her “a real living Frenchwoman.”