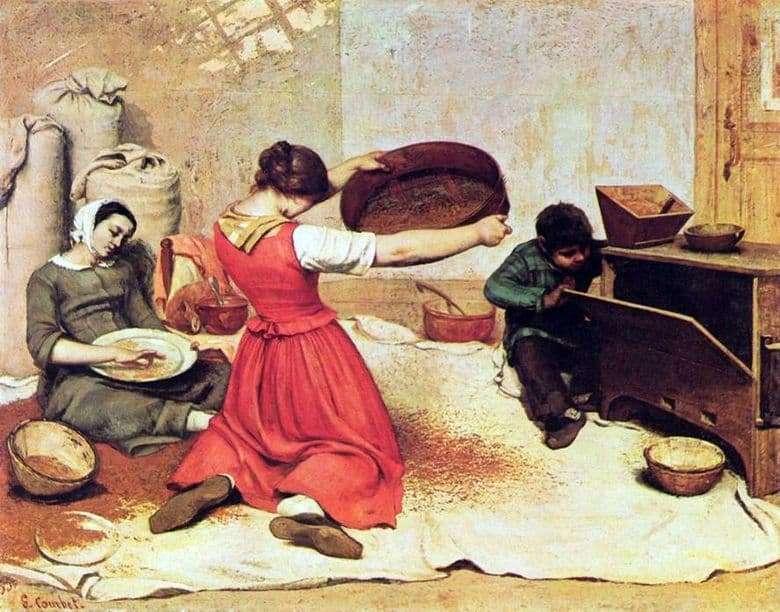 The Veal Girl is the work of Gustav Courbet, written in 1854. She was exhibited at the Paris Salon of 1855, and then in 1861 at the so-called Ninth Exhibition of the Society of Art of Nantes, which then buys the work for the museum of fine art of the city.

The two young women depicted in the picture are undoubtedly two Courbet sisters: Zoe (pictured with a sieve) and Juliet (seated). Presumably, the boy on the canvas, could be Desiree Vine, the illegitimate son of the painter. “Veal girls” are an example of simple realism that Courbet used in his work. Unlike pictures in the romantic style, Courbet does not use perfection of line and form here. Instead, we see unclean walls, a dull look on the girl’s face and the curious boy’s disheveled hair.

Courbet saw this picture as part of a whole series of images of “un tableau de moeurs de campagne”, or “pictures of rural customs”, which also includes

For both paintings, the artist’s sisters were models, which is an obvious fact that unites canvases, in addition to similar subjects. Courbet watched the common people of his home region, whether family, friends, or workers walking along the road, and made them the basis of his realistic project. The light atmosphere of the canvases attracted people and allowed Parisian art lovers to immerse themselves in the atmosphere of a village life that was unclear to many. In both pictures we see two different aspects of the life of women in a small French village.