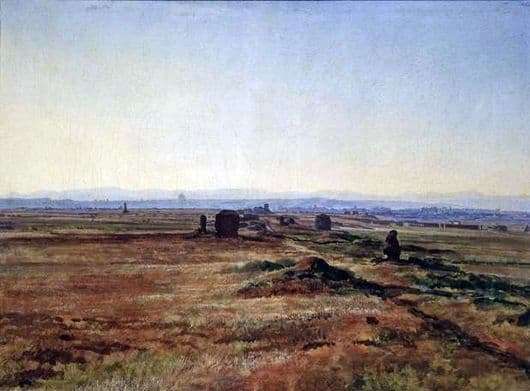 On the landscape of Alexander Ivanov, the main element is the road. It passes through the orange desert rays of the setting sun. The Appian Way leads to Rome.

At its edges are visible ancient tombs, topped with memorable stones. The city is still far away, it stretches somewhere in the background. It is so far from the viewer that it is hidden by a gray haze. Nevertheless, buildings are guessed in it, the nearest of which is an ancient aqueduct.

In the desert there is nothing that would prevent to look at this urban panorama. That’s why it seems that the viewer is hurrying along this road to get to Rome to see all these buildings there, and, perhaps, he will no longer need to hide from the sun – it already sets, but to get an overnight stay is necessary.

Someone from the contemporaries of the artist wrote that this creation will be perceived as the decline of Catholicism. However, the picture does not leave such a feeling. On the contrary, in buildings viewed from a distance somewhere on the verge of the subconscious, one feels the greatness of the ancient ancient city. And let it be the ruins of pagan Rome, but the dome of Peter rises above them, which is quite clearly visible through the haze. And most likely, it should symbolize the victory of Christianity over paganism.

Mountains are visible in the very background. It is just a symbol of eternity and invincibility, inviolability of nature. And even if there are no heroes in the picture itself, the spectator himself feels the hero, after which “the distance is visible”. This is the same road that can be mastered only by walking, and not reflecting on how to overcome it.

Therefore, the canvas is perceived as positive. It is filled with sun and soft shadows typical for sunset. And let the path passes between the graves, somehow you don’t think about it when you go on your mental journey to Rome.