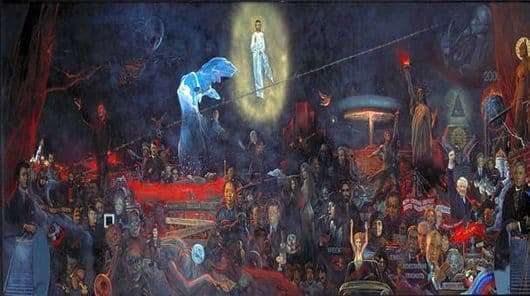 First of all, what is mystery? This collection in a single series of events, and showing it at folk festivals. Mystery is a type of theatrical performance. Then what does Glazunov have on the canvas? Everything and everyone. He created a super mystery on the canvas.

Mixed all the times and colors, connected several generations and at the same time did not hesitate to express. But most importantly, he kind of told his life path and what surrounded this path: events, people, personalities. In any case, the artist made his double self-portrait – at a young age (left) and already at an old age – on the right. Everything between them is history. In the very center – above history – Christ. He seems to be above all this, gazing meekly down and raising his hand for baptism. Next to the still young Glazunov – the fall of the empire, Stolypin, Nicholas II, Rasputin. There is even the famous “Black Square” by Malevich. Einstein, Armstrong, Chaplin. Somewhere in the middle of the canvas, Lenin and Stalin lying in the bloody mist, and very close are Hitler and Mussolini.

Moving on and getting closer to our time. It all starts with Mao – the helmsman of China, and then Che Guevara, Castro, Kennedy, Mick Jagger. Noticeable and “The Beatles”, where without them. Here, Wang, Solzhenitsyn. Two symbols of super-powers: “Worker and Kolkhoz Woman” and the Statue of Liberty. Behind them is the symbol of the Mormons, the temple of Christ the Savior. Closer to the elder Glazunov – General Secretary of the USSR: Brezhnev, Andropov and Gorbachev. One can see Margaret Thatcher, Raisa Gorbachev and even Marilyn Monroe. Of course, on the canvas there is a place for Yeltsin and Clinton. Like all persona, of the whole world. But there is something else on the canvas…

And “something” is symbols. They now and then appear between the characters. For example, at the very beginning, next to the young Glazunov lies the fallen Romanov Coat of Arms – it is a symbol of the collapse of the Russian Empire. And then there is a hand with a pistol, which seems to aim at us. Then the same hand, but already near the adult Glazunov shows a fig. It is also symbolic that Stalin is depicted in the bloody mess that fills the Brandenburg Gate in Berlin.

Mystery turned out curious and terrible, but indeed it is so. This is life.