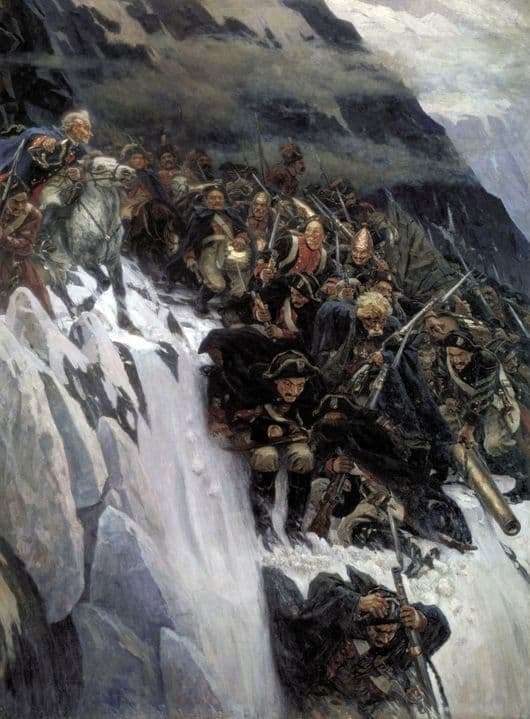 As a matter of fact, the very idea of ​​the painting arose from the famous Russian artist V. Surikov in honor of the centenary of the Alpine passage of the great commander of the Russian Empire Suvorov, who made this transition at the head of his army in 1799.

It was in the film “Suvorov’s Crossing the Alps” that Surikov was able to show in all its glory and grandeur the courage and spirit of the Russian soldiers, who perform a truly great feat, crossing a dangerous path through the mountains. It should be noted that the theme of heroism is inherent in the work of Surikov, because in his paintings he very often depicted people courageous and performing heroic deeds in the name of the honor and glory of his people.

Many art critics say that the dynamic and vivid character of this and many other paintings by the artist ensures his origin, because Surikov himself is a native of the Siberian city of Krasnoyarsk, belonging to an ancient Cossack family, and therefore these features are emphasized most of all in his works.

The picture itself in the foreground depicts Suvorov himself as the true leader of his soldiers, ready to go with them into the fire and into the water, and thus demonstrating his unity with the common people.

In addition, the picture clearly shows an underlined high psychological component of what is happening, which is primarily indicated in the various facial expressions of the soldiers, who by all means strive to fulfill their duty to the fatherland.

By the way, the picture itself was criticized at one time by a well-known expert in military affairs, Vereshchagin, for the improbability of many details in the behavior of the soldiers and Suvorov himself, but Surikov rejected this criticism, stating that the plausibility in it was deliberately removed and that heroism was put in the foreground and the courage of the soldiers and their commander.