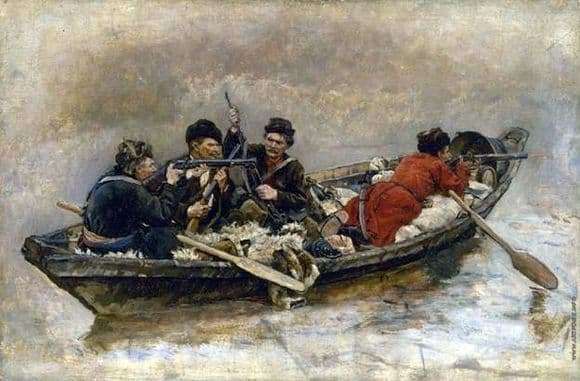 The great artist Vasily Surikov loved his native Siberian lands very much. This was the reason for the creation of his works in historical genre. The struggle of Ermak with the Tatars was a very interesting topic for the painter.

The etude “Cossacks in a boat” was created in 1892 in Krasnoyarsk. Later it became a fragment written in 1895, the painting “The Conquest of Siberia by Yermak”. On it, the artist described the scene from the famous battle of the Cossack army with the Tatar invaders. This battle was decisive, and the Russian lands forever freed from the heavy oppression of the Horde tribes.

Surikov, starting work on the picture, intended to portray the battle truthfully, as described by historical sources. But still he decided that the battle scene of the soldiers in the cold waters of the Irtysh will look exciting and more dramatic than on solid ground.

The sketch depicts four men swimming in a wooden boat. The image of each of them is written expressively. Emphasized their individuality and desire for a goal.

Cossacks know that the future life of their native people depends on the outcome of this battle. Their clothing corresponds to the Cossack form of the XVI century. Each of the men holds heavy guns in his hands.

The image, deployed with his back to the viewer, a Cossack in a red jacket is a very successful compositional decision. His posture is full of dynamism. He reclines in the bow of the boat and opens the open fire at the enemy.

In order to fill the faces of the heroes of the canvas with expressiveness and vital emotions, the artist Vasily Surikov spent the whole summer on the banks of the Don. There he communicated with his countrymen, whose appearance became the prototype of the Cossacks depicted in the picture. This historical work brought the artist many pleasant moments, therefore, finishing it, Surikov experienced a slight sadness.