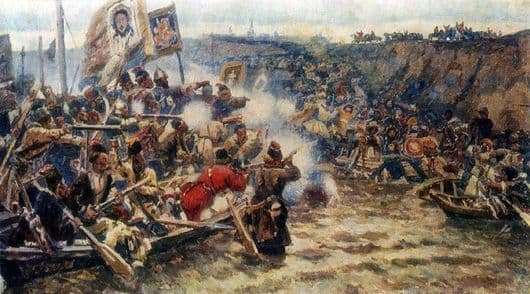 This picture was given to the author is not easy, he wrote her four years. He finished work on it only in 1895. After all, he did not accidentally decide to write this particular picture, because the release from the Tatar Khan turned out to be very significant for Russia. In addition, the author himself was born in Siberia, so he had deep feelings for his homeland.

On the canvas of the picture shows the battle of the brave detachment of Ermak with Kuchumov. It is clearly visible that the Russians take the “top”. The hero himself is not singled out by the artist in any way, as if telling that the commander was not very much isolated himself from the units of his warriors. The only thing that gave us the chieftain is his hand, or rather a gesture that firmly and resolutely directs his troops to the battle and attack.

The faces of the Cossacks, on the contrary, express a storm of various emotions – an invincible will and desire for victory and freedom. It does not matter that the battle is only in full swing, but it is already clearly visible how and how the battle will end. Fallen, the hordes of Tatars flee in panic from the battlefield.

Not without hidden intent is selected for struggle and a gloomy landscape – the autumn sky in gray tones, the fast waters of the river are also not transparent, the river bank is slippery and clay. Looking at this overcast image of a real battle, you unwittingly become its participant, observer, fan…

Only brilliant cannon barrels remain distinct and flashes of shots rise above the battlefield with pink clouds. A special place is defined for the bloodstain. Scarlet spot got exactly the Cossack, as a sign of loyalty and self-sacrifice in the name of the motherland and honor.

Even a simple viewer, not tempted by art, will find in this picture a mass of feelings and experiences, will begin to better accept, understand and perceive Russian culture, will reflect on what our ancestors fought for and what goals they were striving for.

The canvas breathes war, an all-consuming battle in which there are no winners or losers. But still it becomes clear that bloodshed would not have been avoided. Therefore, it was she who became the savior for the people – the blood washing and tears-spilling war.

This picture is one of the great monuments of Russian history, which has preserved in itself the memories of people who will never tell us about this event.