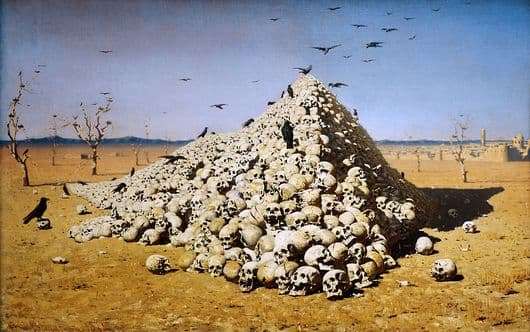 The painting “The Apotheosis of War” by the Russian artist Vasily Vasilyevich Vereshchagin is widely known both in Russia and around the world. Indeed, very few of the artists who specialize in creating canvases about war managed so succinctly and precisely to state the essence of military actions: death, blood and suffering of people.

Vereshchagin painted a mountain of ugly human skulls laid among the scorched war land. The sun ruthlessly incinerates the earth with its rays, but the earth itself is already dead, it is ravaged by war, conquered and disfigured.

Here death and devastation are everywhere, the trees look at the sky with black trunks, the grass is dark yellow in color. On the canvas there is not a single living person, and only the crow hovers over the bones of people. The artist dedicated his picture to all the great conquerors of the present times, past and future, hinting that the death of ordinary people

from the people is the fruit of their self-exaltation efforts.

From the history of the conquerors of the east, Vereshchagin knew that as a deterrent to the enemy, the lords of the eastern lands sometimes created such pyramids of severed heads of soldiers who were executed for their cowardice or killed on the battlefield of enemy soldiers. The sight of such pyramids with the heads of the dead was terrible and caused horror and disgust in any normal person.

The artist somewhat softens this terrible custom, drawing not the heads of just killed people, but only their skulls. Although they with empty eye sockets and rotten jaws do not cause the audience sympathy.

The artist is severe. But the strength of his work is in the cruelest truth of life, the truth that the people themselves, driven by their own selfish interests, start wars with the aim of conquering their neighbors, which leads to hundreds and thousands of human victims. The author urges people to stop in this insatiable thirst for war and to think about the fact that in the pyramid of heads there can be their skull.