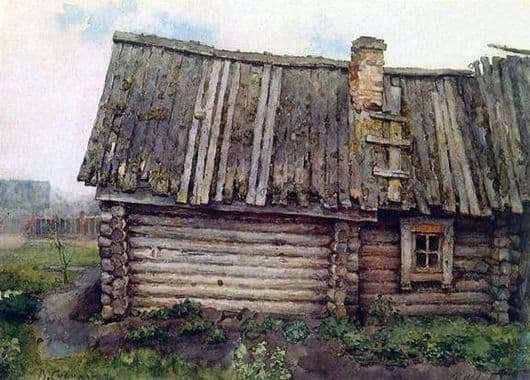 One of the most undervalued works of Vasily Surikov, “The Hut,” was painted by him in 1873 and depicts a dilapidated dwelling, resembling an ordinary village house, made dozens or hundreds of years before the artist decided to capture it on canvas.

In the picture we see people in a hut who lived not poorly, but not richly. This house is very old and many times repaired, which can be seen on the boards of different freshness and roof patches. But it was built for glory and, despite its old age, the pipe on it is intact, the roof does not leak, and the log building itself is slightly inclined and faithfully serves its owner. The path around the hut is trodden, and around it there is some sort of flower beds and even a sapling of some tree, which gives us the opportunity to assume that someone else lives there.

What does the author tell us about his work? Let’s start with the fact that this hut is intentionally depicted in such a way that it is impossible to say whether someone lives there or not, because the emphasis is not on this. Who can live in such a hut? Only an old man with an old woman, like those who lived in Pushkin’s fairy tale in a dugout, or just an widowed old woman… It is important that elderly people live in this gray old house, perhaps only some of them live.

If they have children, then they no longer live in this old hut, and most likely not even in this village, but far away in the city. And what will happen to this house when there are no old men? How many labors were spent on its construction and maintenance, how many generations grew up in this hut, and how much did she survive? And all this will be forgotten, like the hut itself? And how many houses in this village, in all the villages, which, being empty, remain forgotten along with the history, the carriers of which they are…

Surikov painted his picture Hut almost a century and a half ago, but even now we understand that the call of a picture to remember and appreciate its history is relevant today.