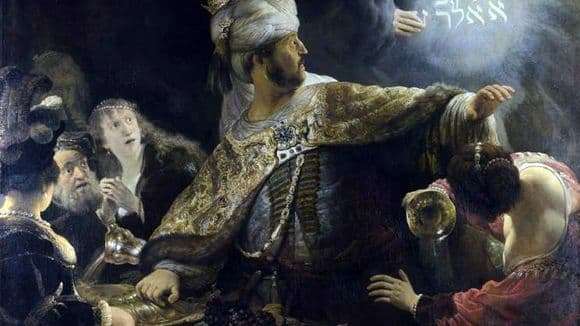 The painting “The Feast of Belshazzar” was painted by Rembrandt between 1633 and 1634. At the moment, the canvas is stored in the National Gallery of London. The painting was written in the Baroque era and is one of the brightest works of Rembrandt, associated with the historical heritage of humanity.

The plot of the picture is quite simple. The legend about the last king of Babylon, Belshazzar, appears before the viewer in all its glory. Belshazzar was a fierce conqueror, he and his ancestors managed to subjugate many nations and countries to their will. No one could resist the power of Babylon, no one except the Persians, whose troops at that time were headed by a very skilled warrior named Cyrus.

The Persian army liberated the conquered peoples and they rebelled against Babylon. The advisers of Belshazzar advised him to escape from the capital and take refuge in one of the shelters, but the proud and stubborn king did not agree even at the time when his city was besieged by enemies, gave a big feast to which he invited all noble citizens and nobles.

In the midst of the feast, when wine flowed like water, and tables literally poured in from food, a strange inscription appeared on the wall of the feast hall – “Mene, teken, uparsin,” meaning the following: “Your kingdom is measured, weighed and given to the Persians.” The moment of occurrence of this inscription was captured by Rembrandt.

In the center of the picture is King Valtasar himself, detached from a rich table to look at the wall behind him, on which in bright sunlight the hand of an invisible person draws the sentence to his kingdom and to himself. The king’s robes are luxurious, gold chains and jewelery hang from everywhere, and on the head, wrapped in an oriental turban, a crown sparkles inlaid with precious stones.

The overall look of the picture is rather gloomy, but at the same time there is some hope for a bright future that God promises.