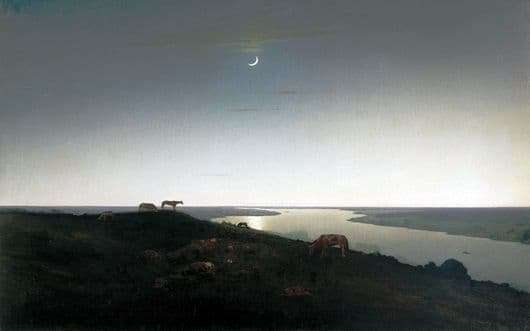 This picture Kuindzhi is considered to be his creative testament. The circumstance of the incompleteness of the picture here appears as a symbol of the eternity of the creative path. This association is enhanced by the lunar illumination of the boundless plains – as if by eternal light on the horizon.

In the picture, the tranquility of the southern night seems to be preparing for the coming of the morning. This expectation of dawn emphasizes the presence of a herd of horses (with unfinished figures) that graze on the hill. Kuindzhi’s mastery, his unique sensitivity is especially evident in the feeling of rising moonlight. The moon itself, illuminating the horizon in spite of its timidity, hangs over the plain like a “modest” sickle, indicating its nightly rights over nature. Yes, she is certainly not the sun, but her bewitching light adorns the plain in her own way.

The sky in the picture is almost

cloudless, and rare clouds as another good stroke emphasize the greatness of the night sky.

The painting “Night” miraculously combines sadness and hope. In this sense, of course, the river plays its role. Her tape in its desire to merge with the transparent sky goes into the distance. Wide and abundant, at the same time with a peaceful and calm surface, it is also dominated by the night and the moon. The reflection of the latter in front of the last visible bend in the picture is a reviving river and a picture as a whole. The sad river at the hill at the end brightens and personifies hope.

Night landscape did not prevent Kuindzhi as always in all its glory to reflect the space. And yet, in the picture, each figure harmoniously blends into the general theme as much as possible. This also applies in the foreground of peacefully sleeping people.

The composition of the painting “Night” was composed according to all the rules of the classics. The picture is dominated by shades of gray, but this does not make it gloomy. Here the gray color with its shades makes everything clean and transparent.

According to Kuindzhi’s picture, the most pronounced sensation is waiting, waiting for dawn, and waiting for the invisible hand of the master to complete it.