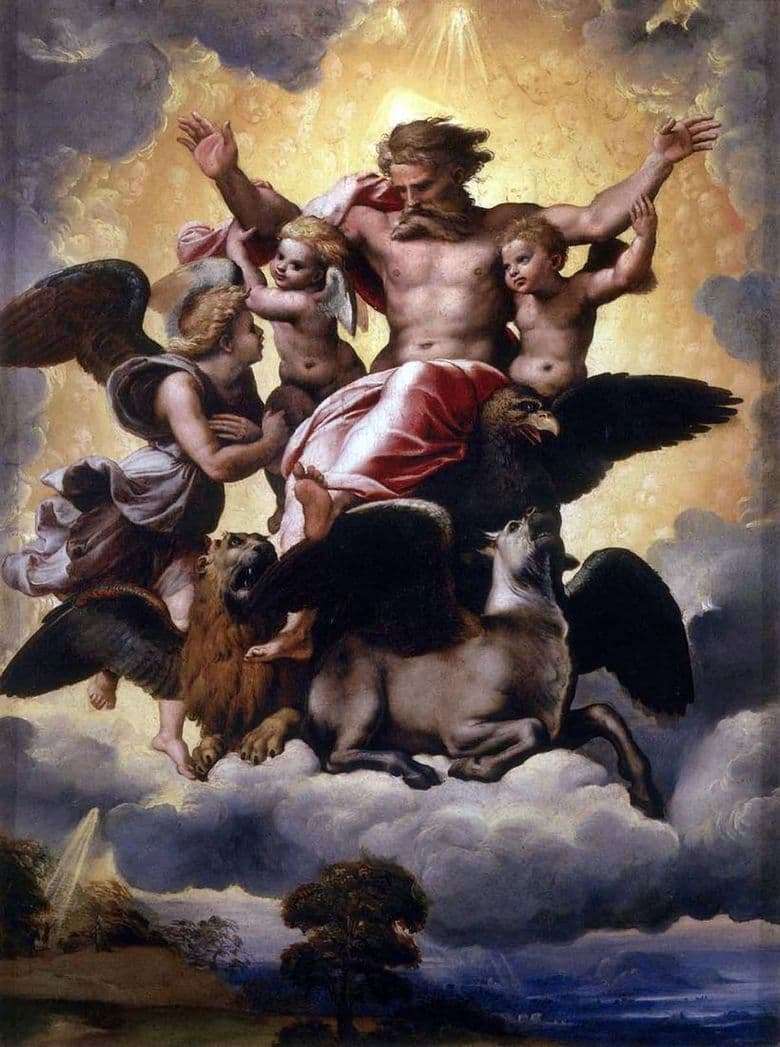 In the image you can clearly see how much Raphael was influenced by the work of another artist, Michelangelo. The sacred group is depicted in the center of the canvas – four beasts are depicted by four evangelists. In the center is not dressed God the Father. His body is strong, young, he is surrounded by an eagle, an angel, a lion and a bull, with two babies of cherubs sitting on his sides. Visually, God is like the pagan god Jupiter. In the Renaissance, God was depicted as an old man, who necessarily had long gray hair and a beard that flutters. The tiny figure of Ezekiel is visible to us only in the lower part of the canvas; a bright beam of light is directed at him. The lower part of the picture depicts a landscape, with a tree in the center. Above it dominates the heavy gloomy sky.

The picture is dedicated to one of the chapters of the Bible, which is dedicated to the Jewish prophet Ezekiel. He had a vision that was accompanied by natural disasters – strong wind, flames and radiance around. In the midst of the fire, Ezekiel considered four animals unknown to the viewer with eagle, lion, bull and human faces. The two wings cover their bodies, and the two were crossed and covered something from Ezekiel that they defended.

Despite its small size, the picture managed to convey to the viewer how the master Rafael Santi was. He faced a difficult task – it was necessary to show everyone how swift the flight of God the Father is.

The painting “The vision of the prophet Ezekiel” was painted in oil on a tree, size 40×30 cm. The author painted a picture for the graph from Verona – Vincenzo Ercolani.