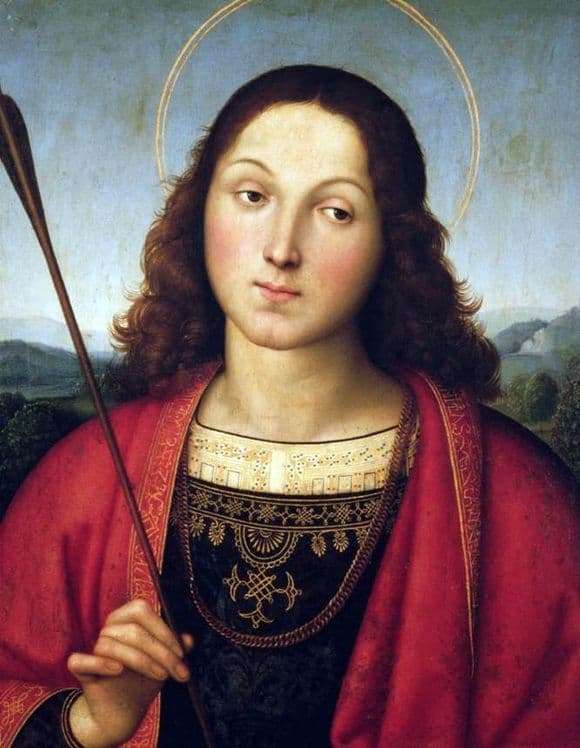 Renaissance paintings have long been considered classics. Rafael Santi is one of the most prominent artists of the sixteenth century. He is among the three most talented artists of all time, on a par with Leonardo da Vinci. Raphael was able to transmit real life events, giving them magic and mystery.

The painting “Saint Sebastian” depicts the same Sebastian. He is considered a martyr, who was shot with arrows, stoned by order of the Roman emperor. These events took place in the third century AD in Rome. This story has become an inspiration for many artists and writers. Sebastian portrayed Antonello da Messina, Giovanni Boltraffio. The exception was not Rafael Santi.

The author of the picture did not show the tragic death of Sebastian. Indeed, many artists portrayed Sebastian tied to a pole. And several arrows are stuck into his body. Raphael simply depicted a portrait of a young man with a halo, emphasizing his holiness. The young man has an oval face, his eyes are lowered, his eyes look a little to the side. The cheeks are rosy, the nose is straight, the lips are closed. He seems to be a modest and calm man. Sebastian’s shoulder-length hair is a little wavy.

Many experts say that Rafael originally portrayed a young man with short hair. Sebastian has a black and gold shirt and a scarlet cape on his shoulders. Many experts also disagree on this issue. Some argue that the cape was originally a different color, and Raphael did not draw it at all. Others believe that the picture has not been changed, but is preserved to the present day the same one that was created. The background for the portrait is an ordinary landscape, clear sky and green trees.

The canvas was written in oil, has a small size of 45 * 36 centimeters. Today the picture is in the Academy of Carrara, in Bergamo.