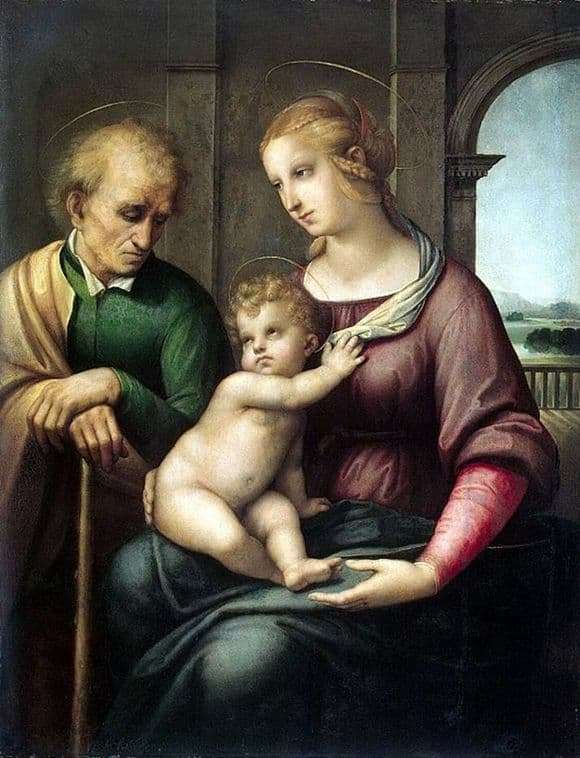 Raphael is the great Italian painter of the Renaissance, and the “Holy Family” is one of his early, filigree and fine works, which is also called “Madonna with a bezborodym Joseph.”

Usually, Joseph was depicted with a beard, thus emphasizing his age. Rafael refused this rule, and in his picture Joseph looks old because of less obvious, and therefore more interesting signs of age. His hair is slightly curled and looks like a dandelion’s fluff, his hands are folded on an old man’s stick. Deep wrinkles lie at the mouth, shoulders are lowered, as if the whole burden of hard life lies on them.

Mary and the baby are in sharp contrast with him – they look young, almost shining in this youth. Maria is simply dressed, her hair is tucked under a shawl. The baby in her arms holds on to her, twisting in the way that only very small children can dodge, which is convenient in almost any position.

All together, the three figures form a kind of triangle – from someone from him, and he will fall.

Earthly, family happiness can be seen in them, instead of the usual holiness and longing for icons. They look at each other, seem like an ordinary family. Mary looks at Joseph with a touch of calm sadness, the baby looks at him, as if silently asking about something, Joseph looks at them as if he is saddened for that simple, earthly thing that he will never have.

The picture is dominated by soft, muted colors, flowing smoothly and slowly. No sharp lines, bright spots, screaming features. Everything is smooth, starting from poses, lines in faces, and ending with repeating motifs of a semicircle and arch.

Nimbus above their heads are barely marked, and this is understandable – Raphael portrayed not just saints, but he sought a man in holiness.