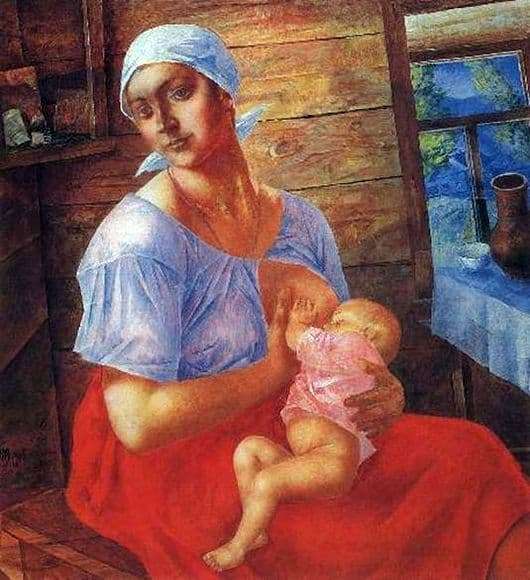 In his picture, Russian artist Kuzma Petrovich Petrov-Vodkin portrayed a young woman breastfeeding her child. The artist turned to the theme of motherhood in 1912 by no means accidentally. For six years, he and his beloved wife by the name of Mara tried unsuccessfully to conceive a child.

Therefore, at this time, he one after another draws pictures depicting motherhood, thereby asking God for his own happiness. And only 10 years after the picture “Mother”, on October 1, 1922, Kuzma Sergeevich’s wife finally gives birth to a long-awaited child. They even said that before birth, he saw his daughter in a dream…

Cloth “Mother” is made in the artist’s favorite red colors. The semantic center of this picture is the figure of a young peasant woman who, sitting in a Russian hut, feeds her baby.

At first glance, the viewer does not find anything that stands out – a young girl from the peasant class, of an unremarkable appearance, in clothes that are usual for that time. But looking at the plot in more detail, you begin to notice that the posture and gestures of a woman unwittingly resemble the Renaissance Madonna or the mother of Jesus – the Virgin Mary, in whose arms lies an innocent child.

In the picture of Petrov-Vodkin, the child lies completely carefree and drinks milk from a nursing mother. Not for nothing artists and icon painters of all times are inspired by the theme of motherhood, because it personifies at the same time love, protection and care that surround and protect not only children, but everything around.

The figure of a woman gathers around him everything without which it is difficult for a person to exist on this sinful earth, to really respond to the pain of other people and rush to help them. After all, a mother not only gives life, it is at the same time the Motherland and the source of the life of each person, which cannot be replaced with anything.