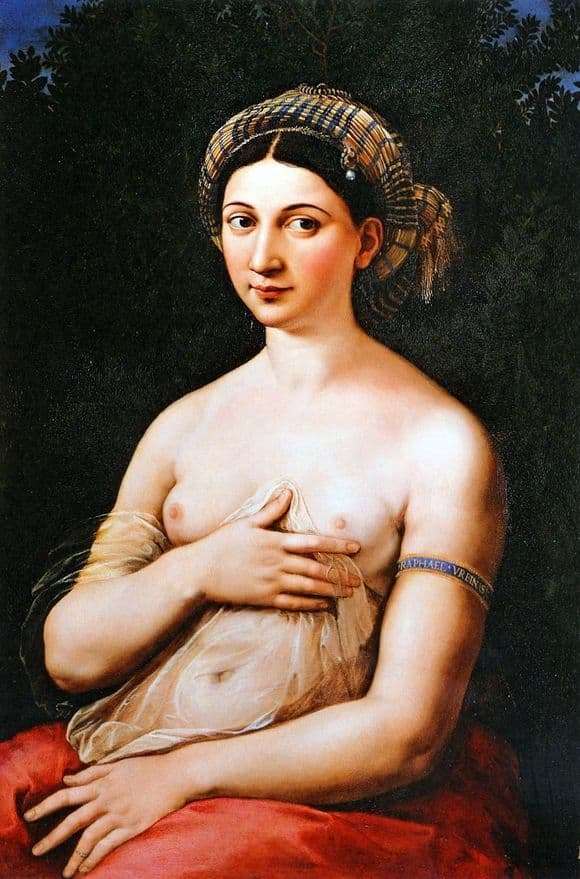 The word “Fornarina” in translation means “baker”, and their beloved Raphael was obliged to the profession of her father. There are two versions of the legend about it. The first one says that Raphael met her in Rome and fell in love without memory. Having bought the girl for 3000 gold from her father, he placed her in a villa specially bought for her, and, every time he visited Rome, he visited her.

However, Fornarina was not loyal and often looked at the students of the artist and his customers, which, however, did not prevent her from remaining his muse for twelve years until his death (evil tongues say that Rafael died just in her bed). After that, having received the inheritance, she led a dissolute way of life, but in old age she repented and went to the monastery, where her real name was indicated in the papers, and she indicated herself as the widow of Raphael.

The second version says that everything said in the first is not true, that Fornarin was almost holy, and that Rafael had been faithful all her life, and their love itself was gentle and pure, not clouded by anything.

Just say how everything was in fact, it is impossible.

Even “Fornarina” can not clarify anything. On it a girl is depicted sitting under a myrtle tree. She is naked, but shy and neatly covers herself with a thin transparent fabric, which can be both an indication of her character and the artist’s irony over her lifestyle. On her left forearm she has a wide bracelet with his name, her hair is pulled into a complex hair style.

She looks a little to the side, smiling slyly, and in this facial expression one feels so much tenderness, so much filigree accuracy of transmission, that there is no doubt that Rafael loved her anyway. Its body is slightly yellowish, as if it is lit by a candle or an oil lamp.

Glorifying her, Raphael also glorifies love in general, its beauty and purity, which do not depend on who became the object of love.