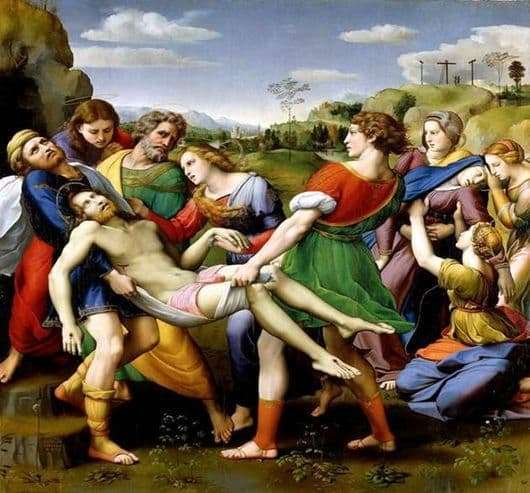 The painting, filled with drama and reflecting the whole essence of human cruelty, was created in 1507 by Raphael Santi, the great painter of the High Renaissance era. The creation of Santi is the personification of the talent of all the best geniuses of the arts for the entire era of the Italian Renaissance. Religious scenes with such depressing tension are rarely found in the artist’s work, however, the plot contributed to the creation of this picture.

It was written by the individual order of Atalanta Baloni, in memory of his son Grifonetto, who were members of the family of the clan of mercenaries who had made a huge fortune in the fighting during the wars of the XIV – XV centuries. Despite the commonality of the family, constant conflicts took place within the expanded clan. So, during the wedding feast, he killed his brother and his bride, and for this he himself fell at the hands of his own cousin. According to legend, in the image of Jesus Christ in a large altar painting, created for the Church of St. Francis, Raphael portrayed Gryphonetto himself. Here is depicted, killed after crucifixion, Jesus Christ, surrounded by his followers and disciples.

The deepest gloom and sadness comprehended them from what they had seen was a cruel punitive measure, which their teacher was subject to. Women and men, taking care of his body, take the Savior away from the place of execution. The Mother of God, who had already fainted from the moral oppression that had befell, is no longer able to even look at the murdered son. Despite the tragedy of history and the people depicted, the picture is filled with harmony, beautiful lines and colors, which the painter so appreciated. The crosses in the background, in one of which Jesus was executed, are already far away