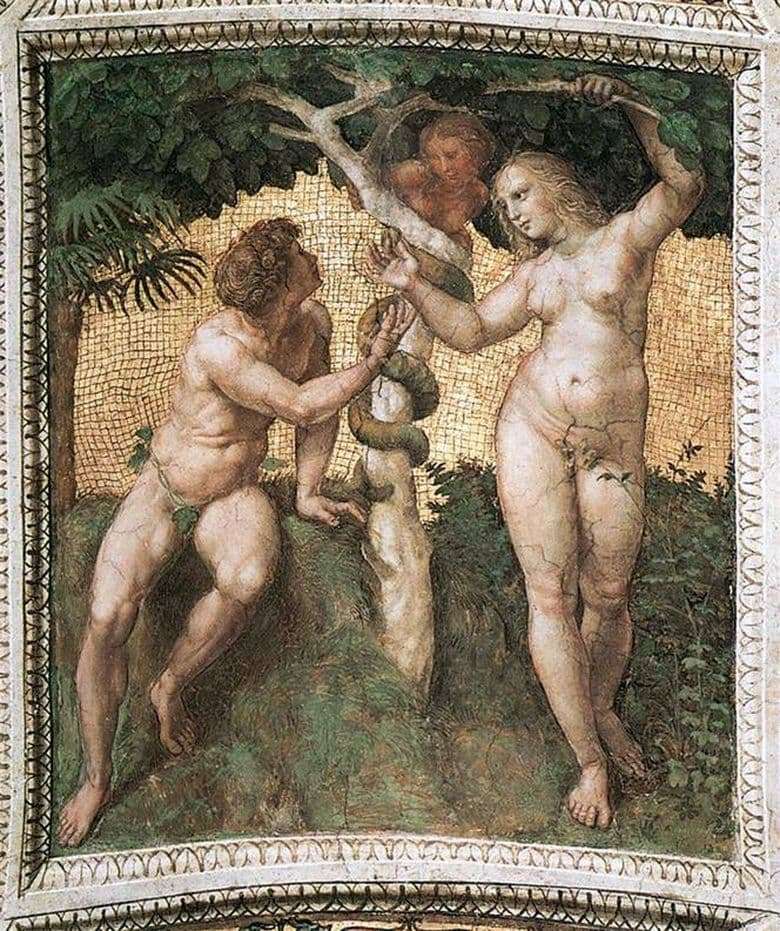 The mentioned stanza – translated from Italian as a room – is the working room of the Pope, most famous because it is painted on the walls and ceiling by one of the greatest Renaissance artists in world history. It is in this room is the well-known work of the master – “The School of Athens”.

The characteristic curves of the picture are explained by the curved design of the vault and the proximity to other works. The painting on wet plaster was supplemented with a fine golden mosaic, which replaced the long-range plan, but did not deprive the product of volume and gave it additional, perhaps, excessive luxury.

Another name for the creation – “The Fall” – corresponds to the basis of the plot, borrowed from the Christian tradition. The Bible describes an event when a woman succumbed to the persuasion of the devil to taste the fruit of the tree of the knowledge of good and evil, she persuaded to try and her husband, the first man. He listened to her, despite the warning: it could lead to death. As a result, people were expelled from the Garden of Eden, lost the location of God and became mortal.

It is believed that the idea of ​​just such an image of the serpent-tempter (half a child) and the common images of Adam and Eve, Rafael borrowed from the work of another outstanding German contemporary artist A. Dürer. Plasticity and soft forms of human figures are emphasized by taking contraception, when the positions of different parts of the body (in this case, the lines of the shoulders and hips, especially women) are opposite, but together form harmony. The violence of the plant world of Eden is expressed through the design of many trees and grasses, which, like in most canvases of that period, partially cover the nakedness of people. Careful selection of color, radiant skin and facial expressions give the fresco serenity and sublimity, among which the dark serpent disturbs and foreshadows near misfortune.