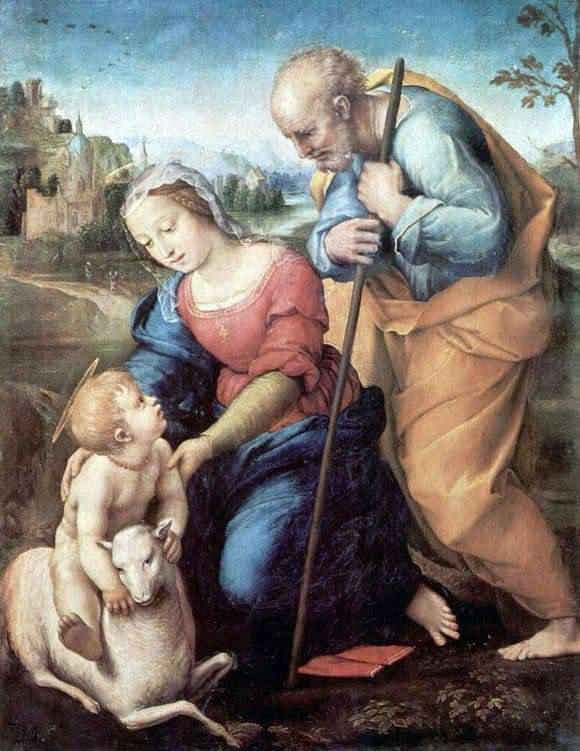 Raphael – one of the most famous artists of the Renaissance. In his works (he always preferred mythological or religious subjects), ancient stories acquired blood and flesh. Always delightfully corporeal and tangible, they represented not the concentrated sanctity of icons, but a kind of reminder that Christ was not only God, but also a man, and his earthly mother and father were always human.

The Holy Family continues this tradition. It depicts a family scene that could have taken place in any earthly family. Warm summer day, baby Christ plays with the lamb, riding him. The mother helps him to hold on so that he does not slip off and not hurt himself, Joseph, leaning on his staff, is watching them, ready, if anything, to come to the rescue. Normal children’s game.

Mary has blue clothes with scarlet, her hair is covered with a white scarf. Joseph is dressed in blue and yellow, he is gray and his face is riddled with wrinkles. The staff in his hands is just a polished stick. The lamb silently tolerates the kid who saddled him, while the boy himself looks at the mother inquiringly. Interrogative and a little annoyed. He looks as if he doesn’t like having interfered in his game, and he is ready to cry, so that adults will understand that he is against it.

On the horizon you can see the castle, the church with the blue spire, and all the nature around it breathes affectionate warmth, while not rushing to your eyes. Yes, there is a blue, slightly faded sky. There is a tree and earth. But they are just a background to the main characters.

However, if you look a little deeper, it becomes clear that the picture has a second meaning, which is slightly more complicated than the game. The lamb is a symbol of the future sacrifice of Christ, and if you know about it, an inexorable future approaches the viewer. A simple scene becomes a precursor to the path to Calvary and suffering.

No matter how earthly and understandable was not happening, get rid of the ghost of the future it will not succeed.