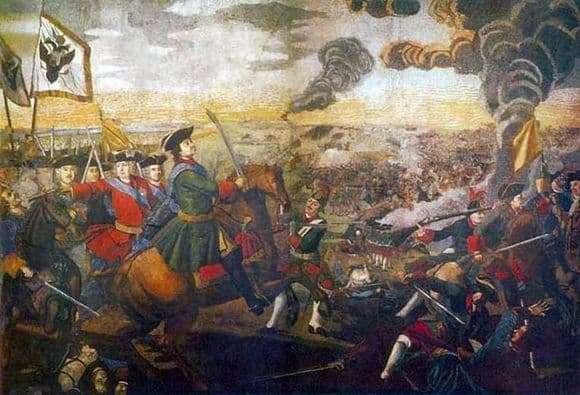 Mikhail Lomonosov is an inquisitive naturalist, a gifted writer and the wisest philosopher did not bypass such an important area of ​​creative work as the visual arts. He studied the properties of glass and, struck by the extraordinary beauty of smalt – colored glass, became interested in making mosaic canvases. One of such a way of created works is the famous “Poltava battle”.

For laying out a mosaic to a scientist it took the help of seven workers and an artist. The hired painter prepared a cardboard base with an image, since Lomonosov did not have drawing skills. But directly the work itself with multi-colored glass pieces was performed by the author of the conceived work. The result was a huge mural approximately 6.5 meters wide and about 5 meters high. It depicted the final episode of the battle of the Poltava battle.

On a summer morning in 1709, a confrontation broke out between the Russian and Swedish troops on the left bank of the Dnieper. The Russians were commanded by the great Peter I, whose exploits especially glorified M. Lomonosov. Tsar Peter is presented to the audience in an emerald uniform, with a saber in his hand, sitting on a raised horse, as a fearless commander. He went to the battlefield, when the victory of the Russian army is already obvious, but there is still a danger to life.

In order to save the sovereign from possible death, he is blocked by the path of a simple soldier. Lomonosov deliberately put this soldier in the compositional center of the picture, wanting to show the people’s importance in the battle, his brave heroism.

The mosaic language is short and clear. Contrast and deep colors. The background for the rich palette of scarlet, green and blue uniforms of the battle participants is the horizon dragged in a haze.

Admire the grandiose panel “Poltava battle” can be in the St. Petersburg Academy of Sciences.