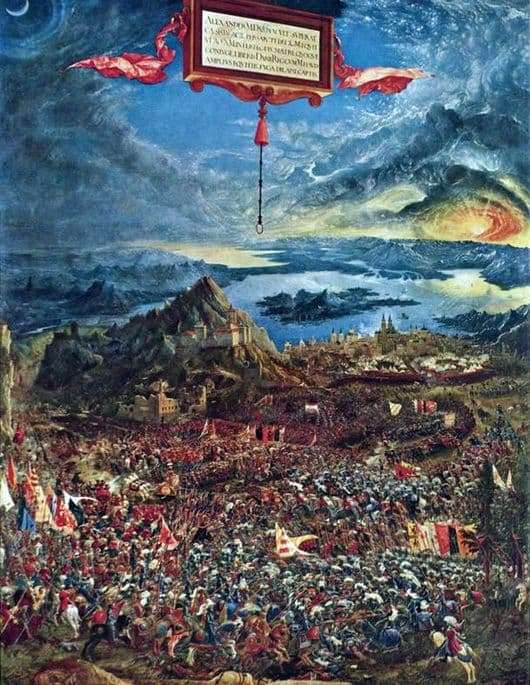 The grand battle is depicted in oil on canvas by a no less ambitious artist. It took Altdorfer not much time to create this masterpiece, as one might imagine looking at the picture. Very rich story, completeness and drawing a lot of details. Truly a great creation. It’s no wonder that this picture became a favorite painting for Napoleon Bonaparte and decorated the wall of his office for 15 years.

In the foreground of the picture come powerful warriors, which are depicted in the total mass of numerous figures. However, in this mass it is possible to distinguish on whose side the superiority. It is clearly visible as the Persians begin to retreat. The glorious army of Alexander of Macedon, as if a single wall threateningly advancing on enemies, causing them to experience horror and retreat. The great victory is depicted so beautifully and picturesquely that it simply amazes the imagination.

It is very remarkable that a big place in the picture is given to drawing the sky. Huge, divided as if into two sides by color, it is depicted simultaneously with the sun and the moon. As if the author opposes each other light and darkness, Persians and Russians. The sun in the sky is shown ascending, as if its rays break through the darkness of the dark sky and give warmth and support to the warring brave men. Since the picture is very rich in semantic plot, it is expressed in the colors used by the artist.

Saturated, juicy tones of red, green, blue, blue, yellow and various shades of brown colors prevail. This makes the picture even more attractive, grand and solemn. The overall impression of the landscape is expressed in a kind of mute reverence before the significance of the historical event and the strength and power of the depicted characters.