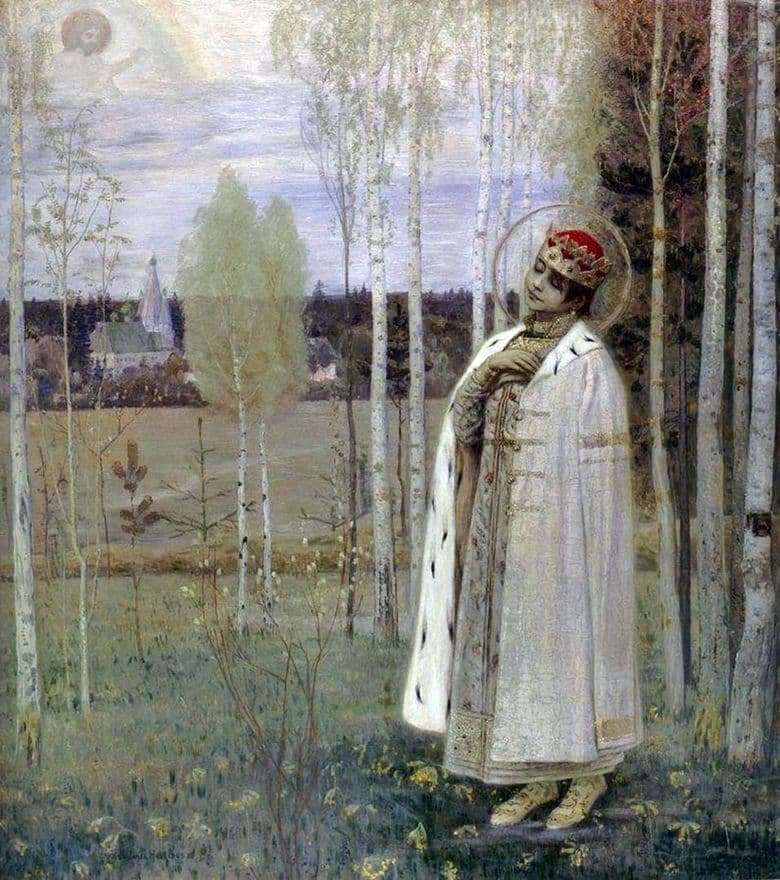 In 1895, Mikhail Nesterov arrives in the city of Uglich. There he wants to prepare etudes for the conceived painting “Dmitri the Tsar of the Slain”. The artist visits the museum, where there were many icons with the face of a murdered boy. In the church, Mikhail Vasilyevich attentively examines the shroud that the prince’s mother had embroidered in memory of the murdered son. The shroud (veil), embroidered by Dmitry’s mother in gold and silk, which depicts the prince himself, shook the artist, who at that time his son was dying.

In Uglich, M. V. Nesterov writes etudes with landscapes where, according to legends, the prince could walk, where he lived, where he was killed. Taking these landscape sketches as a basis, the artist paints a picture about the murdered prince. The result was a picture-icon.

In the right part of the picture, prince Dmitry is hovering over the spring land almost in the center. His hands folded prayerfully on his chest. The nimbus around the head is an attribute of icons and a symbol of the halo of holiness. The prince seems to listen to the voice from above. In the upper left corner of the picture, he looks at the Tsarevich, at the spring Russian land of the Savior in the halo halo, and above him – another rainbow halo.

The rainbow in the Russian tradition of icon painting is a symbol of God’s connection with man. A rainbow is a bridge over which a person’s soul passes from its temporary life into Eternity in the Kingdom of Heaven. Depicting the Lord of the Savior with a rainbow, the artist connected the earthly and the eternal, and the bridge by which the prince from the kingdom of heaven came to visit the earth, and by which the son of Nesterov himself who was dying could go into eternal life. Very closely intertwined in the picture of the fate of the boys, the artist himself.

The landscape only emphasizes the meaning, the deep idea, which Nesterov tried to express with brushes and paints: there is no death, there is eternal life, and man does not leave the earth forever. Spring morning, so bright shows the rejoicing of life after a cold death dream. Every detail of the landscape is written out with love, some kind of gentle clarity. Here in the center, in the foreground, spring yellow flowers, like golden ones, the prince soars above them.
In general, a lot of gold in the picture. It is a symbol of the pure higher heaven on which God dwells. Here and willow fluffs – small, with a golden hue.

White, slender Russian birch covered with light spring fluff, which is also with a golden hue. Regal boy in a golden crown, on his face tenderness and a slight smile. The prince’s light, almost white cloak is harmonious with white birch trees, trimmed with a gold pattern. The lightness and transparency of holiness permeates the whole picture, pours on the viewer.

Only a scarlet-colored cap stands out against this bright, clean background – like a cry about what happened to the innocently killed boy. Nesterov portrayed what he wanted. The artist showed the connection of the indivisible two worlds and he did it remarkably well.