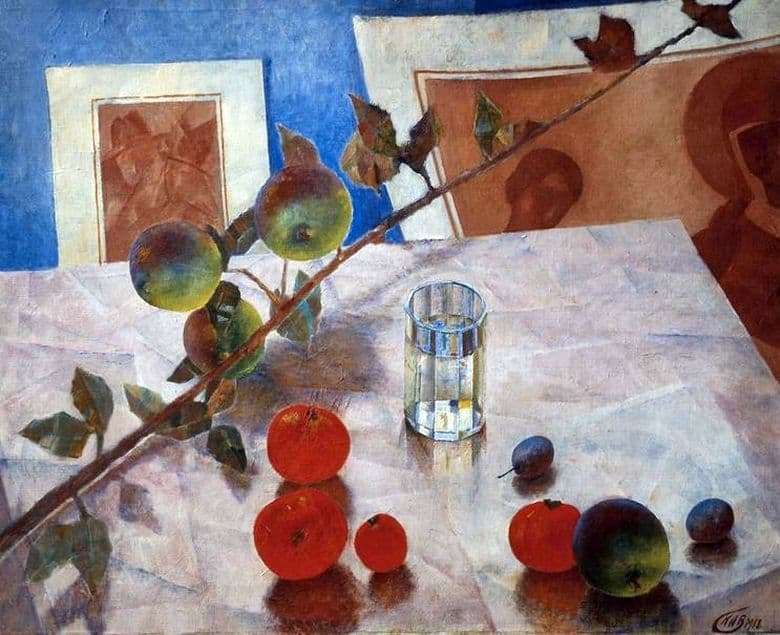 Kuzma Petrov-Vodkin became a well-known artist thanks to such works as Bathing the Red Horse, Death of the Commissar, After the Fight and many other talented paintings of the Russian classics of that time known to us.

To such a form of art as still lifes, the artist came after the creation of his famous masterpieces.

Still lifes were at the peak of popularity and glorified many young talents, but Petrov-Vodkin stands out among them for his extraordinary approach to the image of inanimate objects that carry a deeper meaning than it might seem at first glance.

In most of his paintings, the author portrays such an ordinary proletarian object of dishes, like a cut glass, but beats up its clear boring contours, diluting the background with subtle and bright objects.

In the painting “Pink Still Life” in addition to the glass, there are neatly folded red and green apples in the composition, next to which there are several plums. One of the accents of the artist is the apple branch with large fruits of apples. At the table, we can see a few paintings depicting the faces of saints, more similar to icons, but Petrov-Vodkin does not focus on them, thus diluting the background and leaving some mystery to us.

Having examined in detail the picture with the still life depicted on it, only one question involuntarily arises: what kind of liquid was in the glass? At first glance it may seem that the author thus created a comic connection between a cut glass and his last name, however, having remembered his masterpieces filled with philosophical meaning and depth of thought, it is worth looking more closely at the “Pink Still Life” to understand the essence of the picture and the main the meaning that the artist wanted to convey by portraying these particular objects.