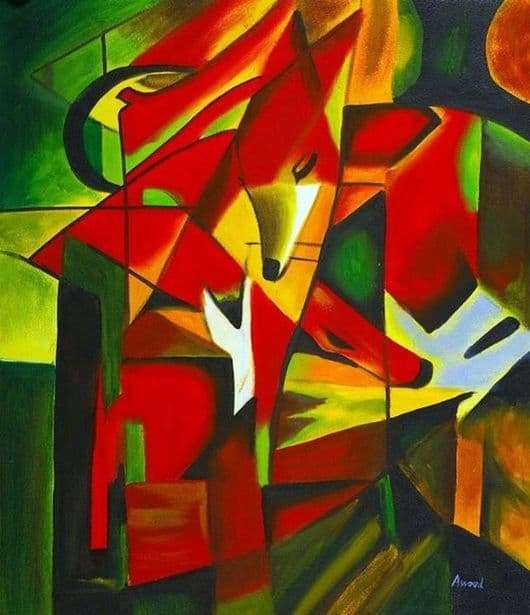 Franz Marc is a German artist, the author of several very unusual expressionist works. Born and lived a painter in Germany at the beginning of the last century, for a long time studying at the university could not give him the necessary knowledge, because the emphasis in the school was on naturalism, which did not interest the young artist at all.

Leaving all he, he goes to Paris, where he meets the works of Van Gogh, Cezanne and Gauguin, which have an indelible impression on his work and give impetus to action. The trip happened in 1907, and by 1913 the artist had a whole series of works, including the “Foxes” painting, made in a new abstract art style.

The central theme of the painting is animals, in this case foxes. For writing, play of bright red, dark green and even blue colors is used. The paintings are more like stained glass than the usual painting of artists, the clarity and brokenness of the lines can be traced, and strangely enough, real fox faces are discernible in this confusion.

The animals are placed in the center of the canvas, they seem to have lumped together, playing, or anticipating danger, so the center is made in bright red color, while the rest of the space is allotted to other colors, mostly green and yellow. It is clear to everyone that yellow is part of fox fur, therefore one can involuntarily consider counting on these flashes of yellow, how many foxes the artist actually depicted, trying to find a few more that hide from the audience’s eyes.

Foxes seem to be behind glass, in the breaking of which a person can observe their amazing life. Unfortunately, the life of the author himself was cut short just 3 years after he wrote, in 1916 he, like hundreds of other soldiers of the First World War, died in the battle of Verdun, leaving behind only an indestructible memory in the form of his own works.