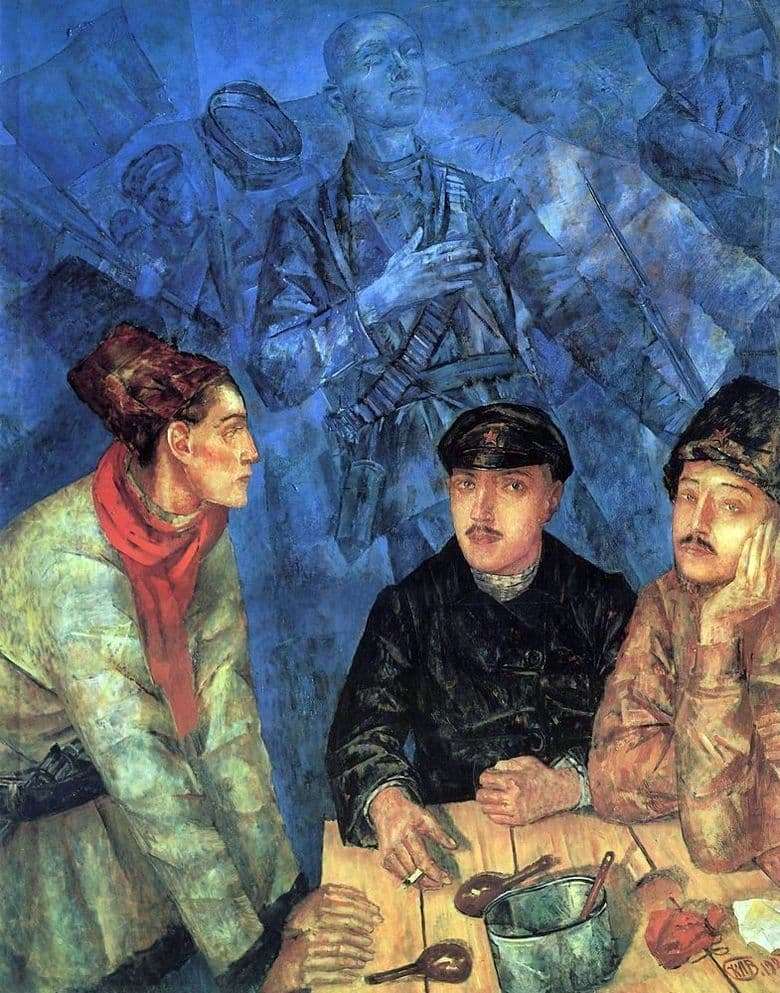 The painting “After the Battle” by Petrov-Vodkin, written in 1923, became an important milestone in the painting of the artist, marking a new stage in his creative quest. Up to this point, all the paintings of the artist did not have a specific time reference and were not specific. The characters of his paintings could be placed in any period of time – and everywhere they would look authentic.

“After the battle” is a picture that has a clear, specific link to the depicted era. It was not enough for the artist to depict three sad Red Army men who recall the deceased comrade. To enhance the impact of his work, in the background, he depicts an episode of the battle, mentally facing the eyes of the heroes. Red Army men see their comrade at the moment of death – and this vision overshadows the actual battle. The moment of death seems to be sealed on the inside of the eyelids of everyone sitting at the table – there is no doubt that they will remember what happened for a long time. The memory that served as the reason for gathering all the participants at the table is depicted in cold blue tones, which further underlines the eerie essence of what is happening.

The grieving Red Army men in the foreground of the painting, on the contrary, are painted with warm paints, soft strokes, making a striking contrast with a transparent dark blue background. On the faces of the heroes there is no hatred and thirst for revenge – rather, a warm sadness for the deceased comrade so early. The sad, inspired images of warriors serve as a reminder of the frailty of all living things. An empty pot on the table emphasizes that chilling emptiness on the border of life and death, which no doubt felt by the soldiers. Each of them understands that tomorrow and he can become on this border – but the determination and firmness, readable in his views, speaks of the desire to fight to the end, until victory.