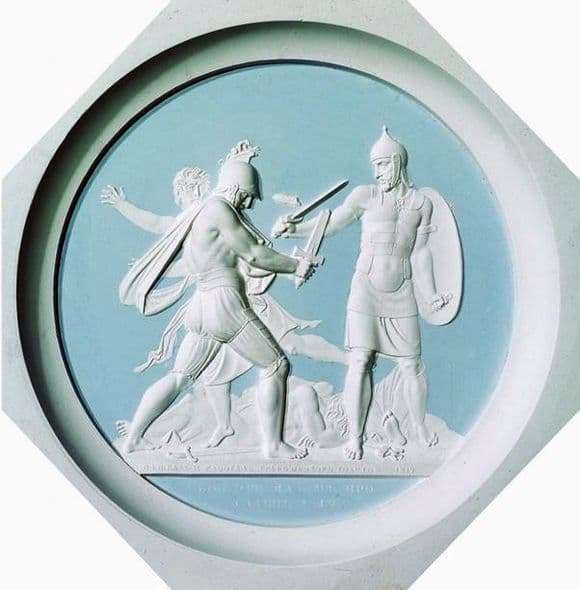 Fedor Tolstoy was one of the most talented and outstanding artists who lived in the XIX century. His work included paintings, sculptures and medals. He mastered in many areas of art and mastered a variety of techniques and performance techniques.

Contemporaries of the author immensely admired his work. To have his work in his home was considered a great honor.

The idea to try oneself in medal art came to Tolstoy not by chance. He came to the service in the Coin Department. Later he made a great contribution to the medal plastic of those times. On medals, he began to depict scenes that hotly stir the public, such as great wars and battles. One of his best ideas was the image of the “Battle of Borodino”.

On this medal, made in 1812, four silhouettes of men are embossed. One of them is a glorious Russian warrior who entered into an unequal battle with his enemies. He is dressed in Slavic armor. The hero stands firmly on the ground in a determined and tense posture.

Opponents attack him, but can not win. After all, we will not break the Russian spirit, as well as the body. One of them has already suffered a defeat and lies motionless at the feet of a warrior. The other seems to have lost his balance. And the third is still ready to fight, but he holds the blade so as to protect himself, because he no longer has the strength to attack.

The artist put into the work his personal attitude to the courage and indomitability of Russian soldiers. For their native land, they were always ready to engage in battles, even if they were doomed to lose in advance, but in the end, victory was still behind them.

Creative expression was the meaning of life of Fedor Tolstoy. The love and interest of the audience for him were the most worthy reward. This remarkable artist, with his talent and work, was able to achieve that his name remained for centuries.