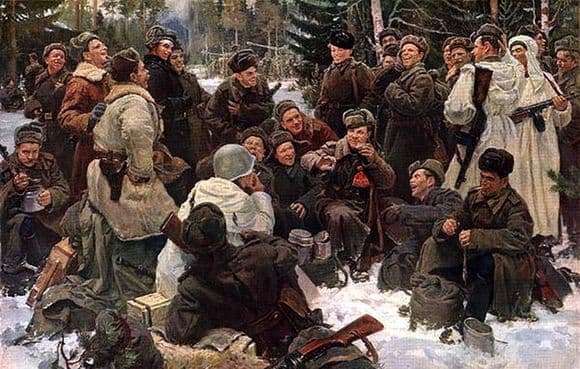 The picture Neprintsev “Rest after the battle” was the result of the painstaking and long work of the author on the characters of the characters. The artist has a great sense of respect for his characters and seeks to bring it to the viewer. A simple pictorial solution does not obscure the main idea of ​​the painting – the reflection of the difficult everyday life of the Great Patriotic War, its ordinary heroes, who in harsh and difficult conditions produced a victory for their homeland.

Neprintsev wanted to portray the fighters of the Soviet Army not at the moment of some heroic accomplishments, but at the time of everyday life between battles. In the characters of the picture, he wanted to embody all the best qualities of a Soviet person, while not slipping into falsehood and pomp.

The viewer sees a group of soldiers of the Soviet Army on a halt, gathered around one of his comrades, who amuses them with a good joke. The center of the painting is Vasily Turkin, an impressive literary character. This is a resourceful and courageous soldier, never despondent and supporting his comrades in battle and on a halt.

Neprintsev worked on his image for a long time, working through his posture, gestures and gaze. He also thoroughly worked out the figures of the other soldiers, down to the smallest details, in order to achieve maximum realism of the images. For this, Neprintsev used all his experience at the front, notes from his comrades, made many sketches from the soldiers of the Soviet Army, studied their gestures, manner of speaking, tried to get used to the image of each of the characters in the picture. He wanted to give each of the characters a picture of an individuality inherent only in him.

The artist intentionally does not use the play of light and shadow in order not to introduce unnecessary theatricality into his work. His characters illuminate the light of the soft spring sun. The landscape around them is a forest in early spring.